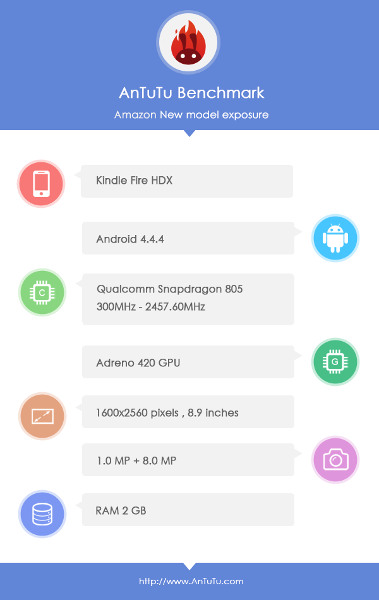 Other specifications of the tablet are similar to last year’s version, including a 8.9-inch ( 2560 x 1600 pixels) display at 339 ppi, 8-megapixel rear camera, 1-megapixel front-facing camera and 2GB RAM. Connectivity and battery capacity of the tablet are not available yet. According to AnTuTu, Amazon is expected to be testing this Kindle Fire HDX tablet with a faster processor.

One of the main aspects of the Kindle Fire HDX tablets were its competitive price tag for its specifications, so the upcoming tablets are likely to be priced in similar range. It is not clear when Amazon plans to launch the tablets. Hope we can expect the refreshed tablet range in coming months.