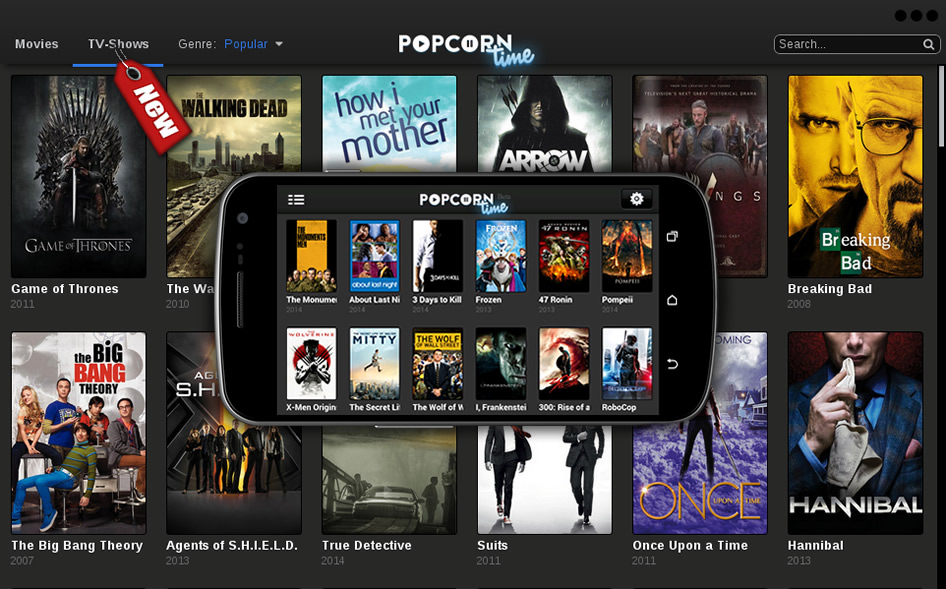 Popcorn time, a popular and upcoming streaming service for pirated movies and TV shows, has just launched itself as an app on Android. The app has already been pulled from the Google Play store but the APK has been made available on the service’s website, which already caters to the desktop platforms with respective apps. Touted to be a Netflix-like service for pirated content, the platform is based on a P2P network, and so, it manages to stay up, using the longstanding copyright loophole that the service doesn’t host content, but the many of its anonymous users do. This is very much like a torrent service, but you can stream the movies instead of downloading them. All the movies are available in 720p and 1080p as streams and it is possible to even choose different streams on the service. Anyway, here is a video of the app announcement –

The Popcorn Time app will be practically the same as its desktop counterparts, with a big list of thumbnails for movies as well as TV shows. The app will contribute to the same P2P platform and hence, grow the user base, which is obviously what the pirating community wants. On the other hand, this is a big pain for content creators in Hollywood, the biggest grossing Film industry in the world. History has shown that piracy doesn’t really affect the movie revenues, as technology has kept advancing for creating unique experiences on a larger screen, luring crowds into the cinema halls, but it is definitely potential revenue lost.

The service, which had a rough start, with takedowns galore, was later taken into the fold of YTS developers, the ones behind YIFY torrents. Since this is a Open Source project, people are contributing to the development and making spin-offs too. Only time can tell if the service will continue its onslaught, but looking at the popularity, status quo doesn’t seem like an option.