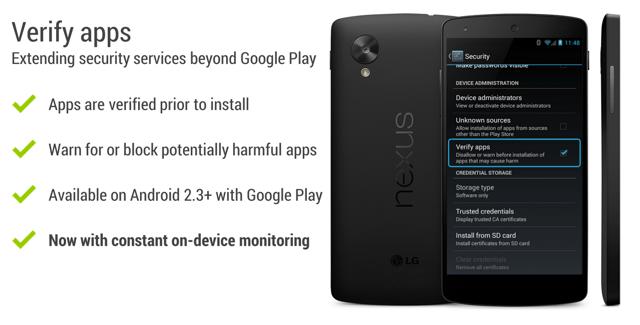 All devices running Android 2.2 and above come with a “Verify Apps” feature built into the Google Settings application. So far this feature has been used to scan apps while installing. The feature would kick in whenever a user would install an APK file obtained from other than the Play Store. Going forward, Google is pushing out an update to flesh out this functionality.

Verify Apps will now run continuously as a background security service that will keep an eye on all running apps and monitor them to ensure that no malicious activity is taking place. What this means is that even if a manually installed APK manifests itself as malware after installation, the service will be able to track it down. This would also work for apps obtained via the Play Store which is particularly important as we’ve seen several cases recently where malware riddled applications disguised themselves as high ranking apps.

It remains to be seen if the constantly running service will be a battery drain and if it will effect performance. The service has been used over 4 billion times since it was debuted. Given the rising number of malware affected apps on the Play Store, this is a very good move by Google to ensure that even if apps slip through safety nets, they can be remotely detected and if needed, deleted.