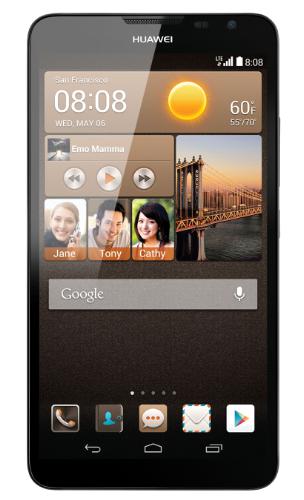 Huawei has just unveiled the Ascend Mate 2 4G at their CES 2014 press conference today in Las Vegas. The refreshed Ascend Mate, which was one of the first 6 inch devices to enter the world of phablets the same time last year, packs the same 6.1 inch 720p display, with a supposedly better IPS panel and finally incorporated 4G LTE inside. The Ascend Mate 2 4G is also slightly thinner than its predecessor and boasts a 200 MHz increase in clock speed featuring the 1.6 GHz quad-core Snapdragon 400 processor with Adreno 305 GPU. Sporting a new 13 MP BSI sensor on the back, it improves upon the 8MP one on its predecessor and also comes with a 5 MP front facing camera this time around.

The Huawei Ascend Mate 2 is very much an evolutionary upgrade over its predecessor, no doubt about that, but of all the similar specifications mentioned, the Ascend Mate 2 4G can also provide reverse charging functionality for taking advantage of the high capacity 4050 mAH battery, which is rated for 100 hours of music on a single charge if the company’s words are to be believed. The company has not provided solid dates for availability but the Chinese will be getting it by the end of first quarter, according to the company. The price has not been announced, but we bet it will be very close to the Ascend Mate’s mid range price that it currently retails at. We will let you know if we find out more information about the Huawei Ascend Mate 2 4G, stay tuned.