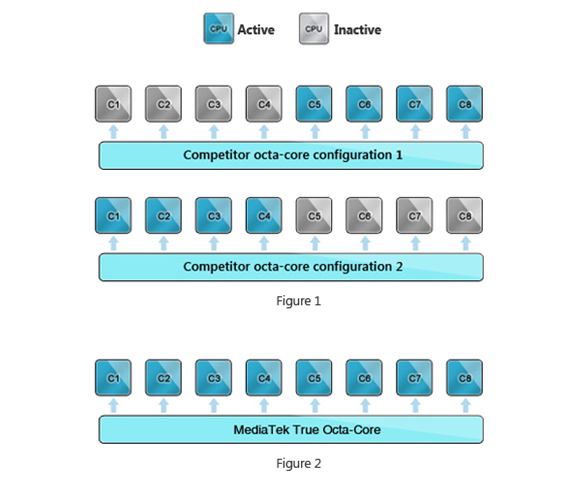 MediaTek, the company responsible for the countless number of Quad Core devices in the mid range Indian market, has today revealed its “True” Octa-Core solution by taking a slight jab at Samsung’s big.LITTLE based Exynos Octa 5. It has been rumoured for some time that MediaTek is going forward with its plans for a Octa Core solution of its own, but the news has finally reached “not a rumour anymore” status with the company proudly announcing this on its site. This “True” Octa Core solution, as MediaTek claims, utilizes the full potential of all the eight cores for a seemingly better performance and even better battery life management.

While the company has stayed mum on releasing the specifics of this upcoming chipset, it does vaguely describe what the advantages will be like, with respect to current Octa-Core solutions.

So, as you can see from above, MediaTek intends to use all the cores at once to enhance the various facets of daily smartphone usage. Interestingly, early rumours point to a eight core solution based on A7 cores instead of A15 cores, but the site also has an unreleased data sheet titled ” Optimized ARM big.LITTLE” which might mean that MediaTek has somehow worked around the multi processing constraints of the big.LITTLE architecture. I guess we’ll be seeing more about the new chipset on 29th July, the day in which MediaTek plans to reveal the currently hidden data sheet.

At this rate, we will certainly be seeing a lot of cheap “Octa Core” devices in the mid range price spectrum, much like what we are seeing with quad core devices these days. Do you think the no. of cores is actually going to help in real world performance? Let us know what you think in the comments section below.