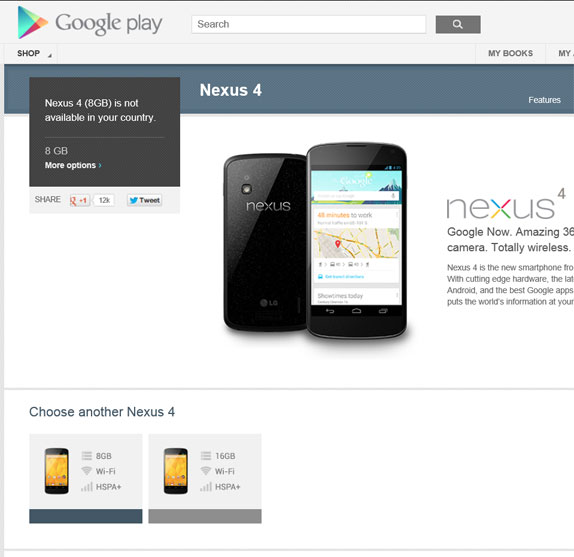 In an interesting development , Google has listed the Nexus 7 up for sale on the Google Play India store just minutes ago.  This is the first time Google is directly selling a device in India to a customer through its Play store. This might be  a sign of things to come. The Nexus 4 is also hidden on the store but the page says that ” it is not available in your country ” . There has been a lot of speculation about the Nexus 4 launching in India ever since Google started selling one of the most affordable Android 4.2 powered in the US market.

The Google Nexus 4 is manufactured by LG Mobile and the handset maker saw unprecedented demand for the device mainly because of the interesting price points – $299 US for a 8GB version and $349 for a 16GB version. The pricing for the Nexus 7 in India does seem higher than $199 price in the US but still acceptable considering the shipping costs and import duties. Google has tied up with Fedex and Aramex for delivering devices in India. Eric Schmidt Executive Chairman of Google recently mentioned that the company is working on bringing Nexus devices to India.  Hope Google finally takes the handset market in India seriously.