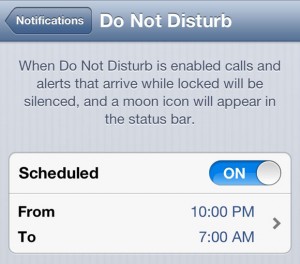 Earlier this week, MacRumors reported that some users discovered the scheduling portion of “Do Not Disturb” feature in iOS 6 feature fail to work after New Year’s Eve. The feature would turn itself on as scheduled, but would not turn itself off automatically. Now, Apple has acknowledged the bug in a support article and says that Do Not Disturb scheduling will begin working properly again after January 7, 2013.

After January 1st, 2013, Do Not Disturb mode stays on past its scheduled end time.

Do Not Disturb scheduling feature will resume normal functionality after January 7, 2013. Before this date, you should manually turn the Do Not Disturb feature on or off.

To turn off the scheduling feature, tap Settings > Notifications > Do Not Disturb and switch Scheduled to Off.