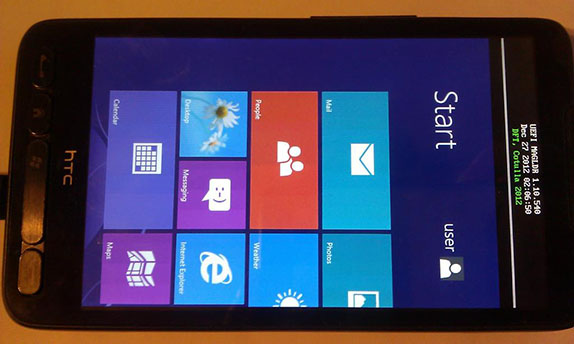 This counts as the most wonderfully bizarre news of the day. HTC HD2, the long lost Windows mobile flagship device from HTC was initially denied the spanking new Windows Phone 7 operating system because of unknown reasons. But that didn’t stop a legion of hackers from XDA to port each and every available OS onto the HD2. The HD2 got everything from Android 2.2 to Windows Phone 8, so one guy @cotullacode(responsible for other ports) thought “why don’t we port Windows RT onto this?” and then Windows RT happened on the HD2. You can clap now.

The HTC HD2 has undoubtedly become the most hackable mobile device right now, largely thanks to the overwhelming community support in terms of drivers for Windows, Linux, Android and now, Windows RT. HTC, which also contributed in opening up the boot loader and the kernel, has let the field wide open for hackers to play in. With the community repeatedly porting one OS or the other to the HD2, it lived beyond its shelf life, and it is still deemed a valuable device.

Now, this @cotullacode guy has posted several screenshots of Windows RT running on the phone, including the desktop mode! Taking a look at the screenshots will make your eyes go wide, so if you are interested, do take a look at that guy’s twitter account, which is full of screenshots of Windows RT running on the HTC HD2. On that note, we do hope that the phone lives longer and eventually gets to run every single port of every OS, just for the heck of it!