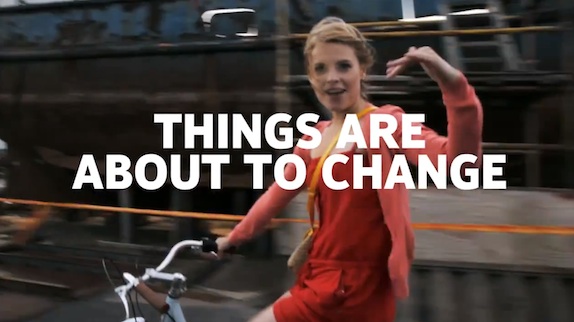 Nokia has just uploaded a 21 second video to YouTube that features a young woman riding her bicycle near a shipping yard. The woman doesn’t say anything, but at the end of the video a block of text appears saying “THINGS ARE ABOUT TO CHANGE” and then the date 05.09.2012 appears. That date, the 5th of September, is when Nokia is going to hold a press event in New York City where it’s widely believed that the Finnish handset maker will announce at least one Windows Phone 8 device. Last week reporters from The Verge said their sources tell them we’ll see two devices. One codenamed “Phi”, which is supposed to be a successor to the Lumia 800 and Lumia 900, and another codenamed “Arrow” that will be a midrange device. It’s safe to say that “Phi” will have a 720p display and a dual core Qualcomm Snapdragon processor under the hood. As for “Arrow”, we haven’t got the slightest clue what it’s supposed to bring to the table.

There are two important questions here that we look forward to finding the answers to next week. One is what exactly is new in Windows Phone 8 that makes it compelling enough for someone using an Android device or an iPhone to switch? In July Microsoft showed off a handful of features that will be in the next version of Windows Phone, but nothing really “wowed” us. The second question is when will Windows Phone 8 hardware be on store shelves? Will Nokia announce something next Wednesday and then say it’ll be out by the end of September or will they make consumers wait a month or two?