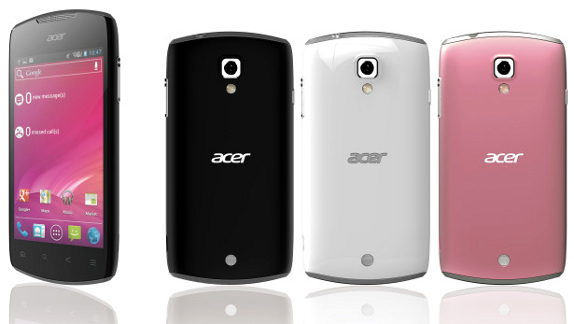 Acer has announced Liquid Glow Android smartphones. It has  3.7-inch display and runs on Android 4.0 (Ice Cream Sandwich). It curved design, chrome details, and a soft-touch casing and also comes with NFC support. It has 5 MP rear camera with panoramic image capture and touch focus and LED flash.

It has Android Beam that enables the users to share images, videos, contacts, favorite apps and music to other NFC enabled Android smartphones. There are no detailed specs about the device as of now but according to pocket-lint the device comes with 1GHz Qualcomm 7227A processor, a WVGA display, 1GB of storage and 512MB of RAM. It measures 117 x 58.5 x  11.5 mm and weighs 125g. Hope we get to know more about the device when they showcase the device at 2012 Mobile World Congress in Barcelona next week.

The Acer Liquid Glow would be available in different colors such as Sakura Pink, Alpine White, and Cat’s-eye Black starting early Summer 2012.