In the future almost everything is going to be mobile and compact, and Canonical has just taken a step further to prove this fact. I am a big fan of Open Source and when I heard about Canonical working for a mobile version of Ubuntu I was excited, like I was excited when I heard about Google working on a Linux based mobile platform, but I had no idea that Ubuntu for Android was what they have been working on and this concept is really beautiful, the merger of mobile O.S and a desktop O.S is here. 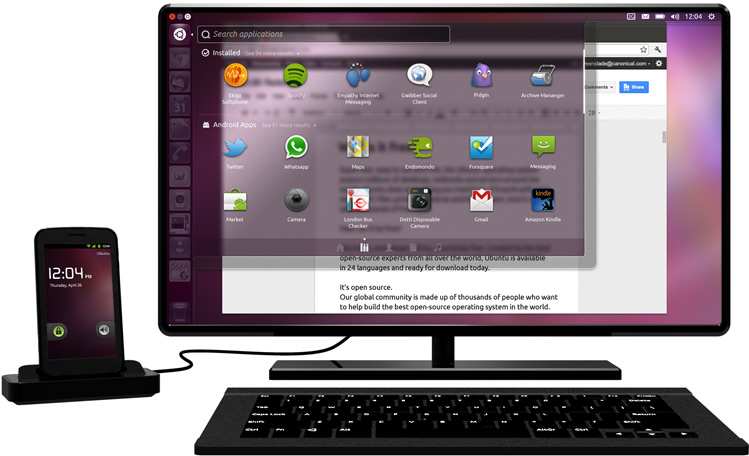 When we hear about Ubuntu for Android people wonder whether it is an app when opened it loads the desktop Ubuntu interface or is it a program which boots into Ubuntu as a dual boot on the phone, well it is neither, the whole interface of Ubuntu will not be opened on the phone, You will only be able to see the Ubuntu interface when you connect your phone to a monitor or a laptop, or use the dock to connect it to any monitor or display. So when you are using your phone as a normal mobile device, it uses the normal Android O.S and nothing changes but as soon as you connect it to the phone dock which is connected to a screen/monitor, laptop then Ubuntu pops up and you can work as if you are working on a full fledged desktop. This means that as soon as you connect your phone to the monitor, your mobile acts as the CPU, which means that you are carrying a portable CPU in your pocket.

When the phone is connected to the monitor, Android is still running in the background, this means that you can see and respond to calls from the monitor itself, you can also reply to messages, etc. As Android is always running, think that you are browsing or writing a mail and suddenly you had to leave, and when you pick up the phone from the dock when connected to the monitor using Ubuntu, the half written mail will be seen in your phone or the browser will have the same pages loaded which you had opened on Ubuntu, so both these O.Ses run side by side, but never interfere with each other when one is in action. Ubunutu also syncs the files, WiFI, and almost everything present in your Android phone. One more great thing about this concept is that Ubuntu running on the monitor does not have anything to do with the Android version, it can run on any version of Android as Ubuntu does not really run as an application on top of the Android platform.

This is of course the first step, and the picture is really wonderful, I would go ahead and say bravo Canonical. As both of these O.S are open source, I could just imagine what all can be done with this concept. I am hoping everyone knows about the Padfone, as in the padfone, when you put the phone inside the tablet, it loads up the tablet UI, similarly some manufacturer can work on a project where if you put an Android running phone into a tablet then Ubuntu loads up, hence you have a complete desktop O.S setup right in front of you. It is something similar to the Motorola laptop dock, but taken much much further, so if you are carrying any dual core mobile device then you are not just carrying a phone, you are also carrying a desktop in it.

This concept will be demoed and may be made available to consumers at MWC which is not really that far, so stay tuned as we inform you more about this.