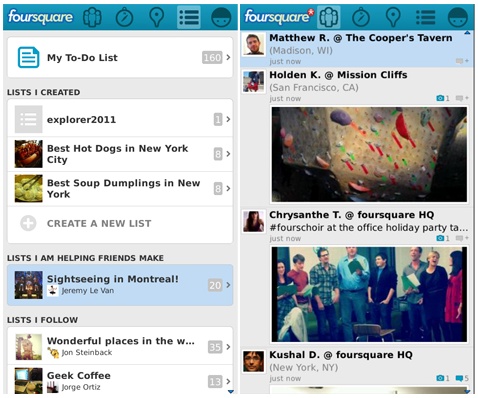 Foursquare for BlackBerry has been updated to version 3.5.0 that brings new features such as Foursquare lists that shows your To-Do List, the lists you follow, and suggested nearby lists. This update also includes in-line photos that your friends share that could be viewed on the Foursquare home screen. The previous update brought events and check-in details and more.

The Foursquare lists are divided into My To-Do List that lets you track the list of things you wanted to do, List you created, list you follow and suggested nearby lists that shows you nearby selections of landmarks. You can also any lists from + save button to view it later.

The check-in photos now show up on the Foursquare’s main screen so that you can view and comment of the quickly without loading into another screen. This version also includes tweaks and fixes, including a newly-green check-in button.

Download Foursquare for BlackBerry v3.5 from the BlackBerry App World for free.