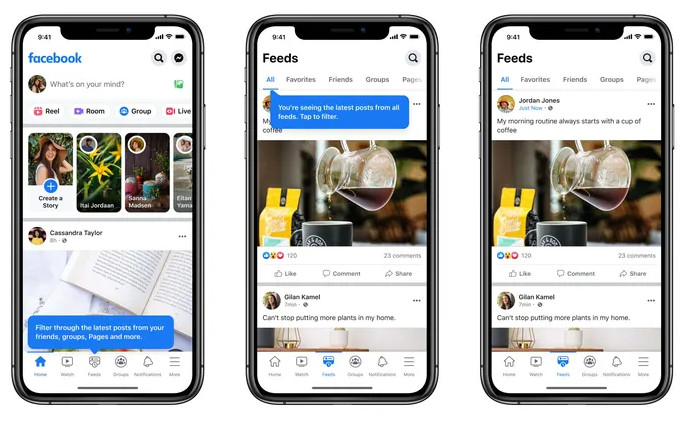 The Meta-owned Facebook app is getting a revamp to its interface. This time it’s not the design changes, instead the company has split up the content we consume on the news feed (i.e. the feed we see when opening the app). Till date, we were consuming both our personal content—friends’ posts, posts from pages we follow, etc.—as well as suggested posts from Facebook in the news feed.

However, with the most recent version, Meta has separated both. Home is the new name for the first tab you see when you start the app, and it is intended for algorithm-based discovery with Reels, Stories, and other tailored content. Then there’s a brand-new Feeds option with recent postings from friends, groups, Facebook Pages, and favorites, but no “Suggested for You” posts.

This is an essential upgrade because we used to miss posts from friends, groups, and pages among a slew of algorithm-based suggested content. This was the most troubling aspect of the previous version. Also, in this way, we could explore suggested content separately whenever required.

It is said that postings from friends and family will still appear on the Home tab, but they’ll be surrounded by suggestions determined by a machine learning rating system. There will also be advertisements in the Feed tab. This seems a confusing move from the firm. Let’s hope it will get better in the future.

Meta expects the updates to be rolled out globally for both Android and iOS over the coming week.

Regarding the new update, Mark Zuckerberg, Founder and CEO of Meta said,

One of the most requested features for Facebook is to make sure people don’t miss friends’ posts. So today we’re launching a Feeds tab where you can see posts from your friends, groups, Pages and more separately in chronological order. The app will still open to a personalized feed on the Home tab, where our discovery engine will recommend the content we think you’ll care most about. But the Feeds tab will give you a way to customize and control your experience further.