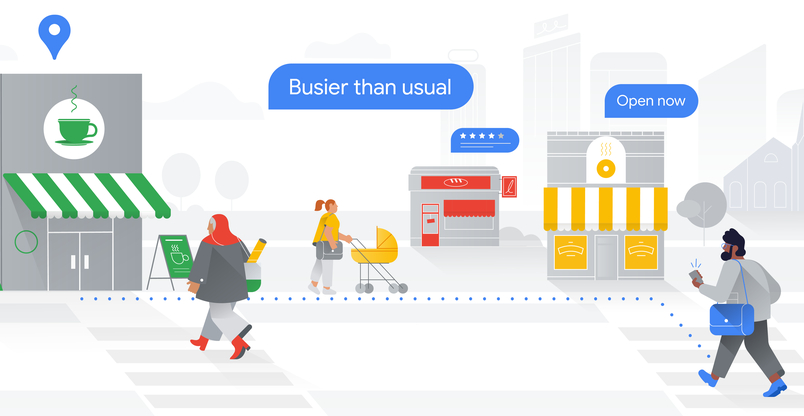 During their Google I/O 2021 event, Google revealed a range of new updates to Google Maps that were made possible with their advancements in AI. Users will now have access to better Live View and more detailed street maps, spot busy areas at a glance, get more environmental friendly routes and more.

Live View in Google Maps can now show relevant information such as street signs for complex intersections, helpful details about the shops and restaurants such as how busy they are, recent reviews and photos. Travelling users can also see where they are in relation to their hotel so that they can find their way to it.

Google has improved their application of AI in Street Maps, giving them a lot more details such as where sidewalks, crosswalks and pedestrian islands are. Street Maps will also show the shape and width of a road to scale, and the feature will be rolling out to 50 more cities by the end of the year, including Berlin, São Paulo, Seattle, and Singapore.

Google Maps already provided users with information about how busy a location is, which is useful during the pandemic when users want to maintain social distancing. Now, users can see the relative busyness of an entire area and take decisions accordingly.

Lastly, Google is updating their route suggestions by introducing a new concept – prefer routes that have reduced chances of hard braking. By using AI and analyzing several braking factors such as construction or visibility conditions, Maps can ascertain if a particular route has a lesser chance of hard-braking to occur, and if the ETA difference of the route is minimal, then Maps will recommend that route.

All of these features will be rolling out to Google Maps on both Android and iOS in the coming months.