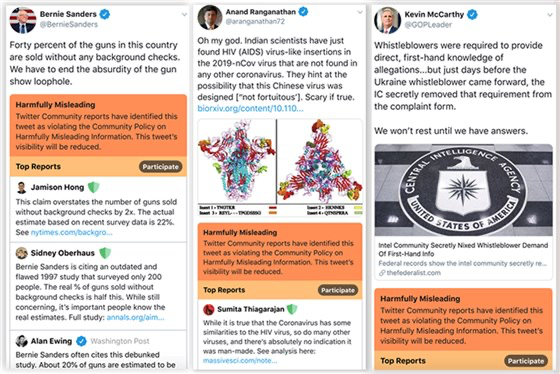 The spread of misinformation in social media is an issue that is widely debated these days. According to a leaked demo, Twitter may roll a new policy that targets misinformation by having a community of fact-checkers and journalists marking the tweet as “Harmfully misleading” or not.

Twitter did confirm that they are testing the feature and that this is one possible iteration of the new policy that they are developing. In the leaked demo, a community of fact checkers and journalists who are verified on the platform can vote on a potentially misleading tweet and if so, the tweet will get a red or orange badge right below, which will have the same size of the tweet. It will state that the tweet violates the community policy and hence will have its visibility reduced.

Twitter is planning to build its community of fact-checkers by giving users a chance to earn ‘points’ and a ‘community badge’ if they contribute in good faith. The point system will behave in similar fashion to Wikipedia, in an attempt to prevent trolls and political ideologues from becoming moderators. The moderators will be asked to categorise a tweet as ‘likely’ or unlikely to be harmfully misleading and also on a scale from 1 to 100. The more points a moderator has, the more their vote counts.

On the issue of risks of spreading misinformation, major platforms like Twitter and Facebook have taken different approaches. Mark Zuckerberg, CEO of Facebook has clearly they will not do anything to fact-check political advertisements. Twitter on the other hand, has completely banned all political advertisements on their platform, explaining that they believe political reach should be earned and not bought.