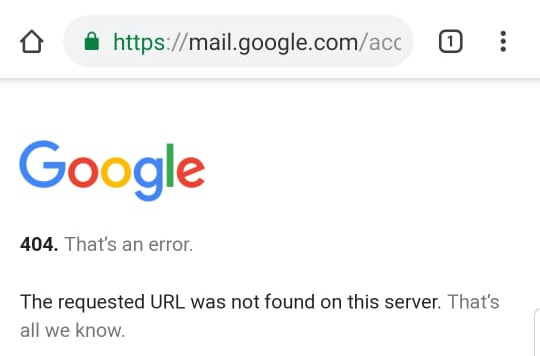 Update: Several users have started reporting that they are able to log-in and are not facing 404 issue anymore.

Google’s Gmail is reportedly facing outage in parts of the world with users reporting ‘404 Error’ while trying to log in to the site. However, other products including YouTube, News seem unaffected. Gmail is currently down in India and some part of Europe for more than half an hour.

Hi there. Currently, there are no disruptions. Could you try clearing the browser cache and cookies to see if that helps: https://t.co/0qpxh9xK73? Keep us posted.

However, unaware of the issue, Google claims that there are no disruptions. The Gmail for Android and iOS are also working just fine, meaning the issue is restricted to the desktop version. According to Downdetector.com, the Gmail is having issues since 6:16 AM EST (around 4:46 PM IST, Tuesday.)

Breaking down the issue, 42% problem was during log-in, while 31% of users reported they could not receive messages and about 25% of users reported a problem with the website. Users have taken to Twitter to bring the outage to everyone’s notice. We’re sure Google would fix the issue soon enough.