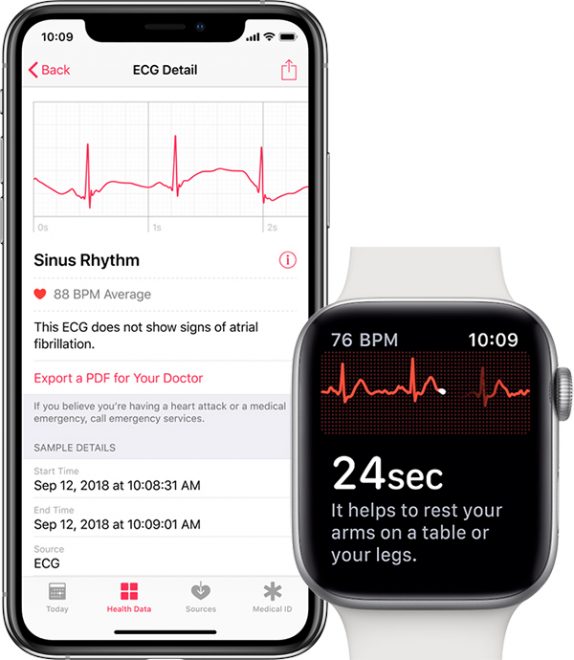 WatchOS 5.1.2 for Apple Watch Series 4 to bring ECG functionality, according to an internal Apple Store training document. The version is currently in beta testing. WatchOS 5.1.2 will feature an ECG app that can indicate whether your heart rhythm shows signs of atrial fibrillation, a serious form of irregular heart rhythm, or a normal sinus rhythm.

Apple Watch Series 4 is capable of generating an ECG similar to a single-lead electrocardiogram. ECG and other heart data will be collected in the Health app on a paired iPhone. Apple’s document lists a minimum requirement of an iPhone 5s or later running iOS 12.1.1.

To take an ECG reading from the Apple Watch, users will need to place a finger on the Digital Crown while wearing the watch. The reading is completed in 30 seconds, allowing users to determine whether their hearts are beating in a regular pattern or if there are signs of atrial fibrillation.

Furthermore, Apple’s training document reveals that the ECG app is regulated and only available in regions where it is cleared for use. The app will initially be available in the United States, where Apple has received FDA clearance, but Apple Watch Series 4 models sold worldwide include the electrical heart sensor for future expansion.

Apple Store employees are instructed to advise users that the ECG app is “not intended to be a diagnostic device or to replace traditional methods of diagnosis,” and “should not be used to monitor or track disease state or change medication without first talking to a doctor.” A separate Apple training document suggests that irregular heart rhythm notifications will also be enabled in watchOS 5.1.2 on Apple Watch Series 1 through Apple Watch Series 4 models.