Mitsubishi Electric and NTT DOCOMO have announced that both the companies have achieved world’s first 5G mobile telecommunications proof of concept for 27Gbps and 25Gbps maximum throughputs via one mobile terminal over communication distances of 10m and 100m, respectively, using the 28GHz radio frequency. 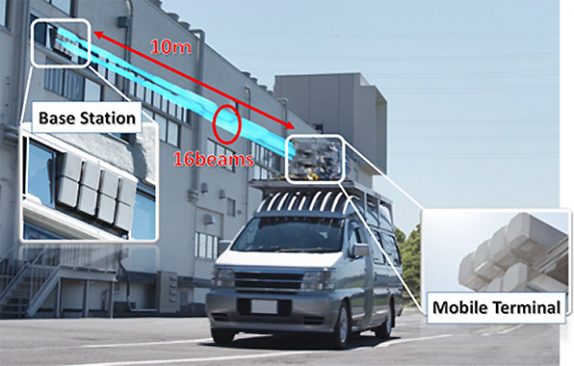 Base-station antennas installed on the wall of a building directed beams to mobile-terminal antennas installed on the rooftop of a vehicle. The company says that the trial was the world’s first successful wireless downlink transmission at maximum data rates of 27Gbps and 25Gbps for per one mobile terminal when the communication distance was 10m and 100m, respectively.

Both the companies have jointly undertaken “The research and development project for realization of the fifth-generation mobile communications system – High data rate and low-power-consumption radio access technologies with higher-frequency-band and wider-bandwidth massive MIMO” commissioned by Japan’s Ministry of Internal Affairs and Communications.

Both the companies have carried out 28GHz-band outdoor field trials to verify the feasibility of 16-beam spatial multiplexing in line-of-sight conditions, where massive-element base-station antennas installed on the wall of a building directed beams to mobile-terminal antennas installed on the rooftop of a vehicle. The mobile terminal moved along two different streets. The distance of one mobile terminal was 10m from the base station and the distance for the other was 100m. Mitsubishi Electric and DOCOMO developed beamforming technology in an analog domain and inter-beam interference reduction technology to suitably separate overlapping beams with digital signal processing at the base station. The result is 16-beam spatial multiplexing, which has been unachievable with 4G.

The trials achieved the world’s first successful wireless downlink transmissions at data rates of 27Gbps and 25Gbps when the distance between the base station and the mobile terminal was 10m and 100m, respectively. The achieved peak data rates correspond to spectral efficiency of 67bps/Hz, believed to be the world’s best performance for 28GHz-band mobile telecommunication. The developed technologies are expected to enable wireless communications at ultra-high data rates of more than 20Gbps to moving vehicles with numerous passengers, such as buses.