A month and a half after the official rollout, iOS 12 is now installed on 63% of active devices from last four years. This data is according to updated iOS 12 installation statistics shared on the App Store support page for developers. Apple has been actively sharing the statistics since the iOS 12 release, providing information on both newer and older devices. 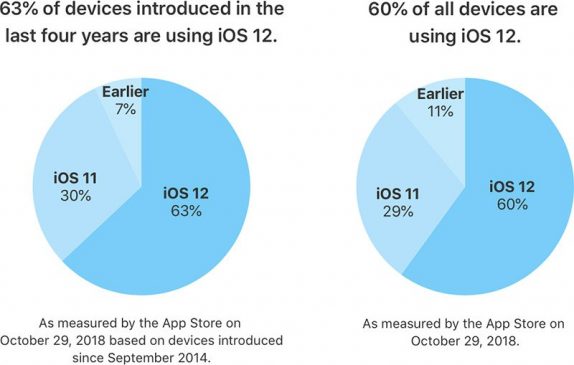 The iOS installation rates are being broken down in a new way. The 63% statistic applies only to devices released in the last four years. 60% of all iOS devices have the update installed. A 29% of devices continue to run iOS 11 while 11% run an earlier version of iOS. As for devices released within the last four years, 30% still run on iOS 11 while 7% have an earlier version of iOS installed.

The iOS 12 installation rate grew 10% from data collected back in October which was at 53%. Between October 10th and October 29th, which is the date Apple last collected the installation numbers, the company released the iPhone XR which likely explains the 10% jump in active devices using the new operating system. The jump is expected to be even more over the next 30 days with the iOS 12.1 update. The iOS 12.1 introduces 70 new emoji characters, support for Group FaceTime with up to 32 members and more.