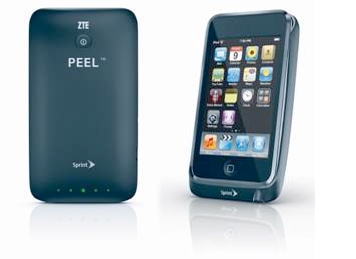 The only major difference between the Apple iPhone and iPod Touch is that the iPhone has calling ability, which is missing in the iPod Touch. You can’t use 3G on your iPod Touch, but US mobile carrier Sprint has announced a 3G-Mobile hotspot case for 2nd and 3rd generation Apple iPod Touch called ZTE Peel which allows the user to use 3G from anywhere in the USA where Sprint network coverage is available.You basically carry a wireless hot spot with your iPod touch in the form of the case and you connect to 3G via WiFi. Full marks for innovation we should say !The case is manufactured by ZTE, and it’s named ZTE Peel. Sprint will officially launch the device on November 14th, and the case will go for $79.99, and if you are planning to buy it, then you have to pay $30/month. The case supports WEP 64-bit encryption, and the case has a battery life of 3 hours, and is compatible with Windows 7, Vista, and XP as well as Mac OS 10.5 and 10.6. Check out the Press Release below

OVERLAND PARK, Kan. (BUSINESS WIRE), November 10, 2010 – Beginning on Nov. 14, Sprint (NYSE:S) customers can attach ZTE PEEL™ to their Apple iPod touch and connect to Sprint’s 3G network. ZTE PEEL is a unique device that cradles the second- and third-generation iPod touch with a case-like form factor. With universal Wi-Fi compatibility and support for up to two Wi-Fi enabled devices, iPod touch users will have a virtually anywhere, anytime Internet connection that removes the reliance on a Wi-Fi hotspot for a data connection. Customers simply slide their iPod touch (touch-screen face out) into ZTE PEEL, press down on both sides until it clicks into place, and then press the power button located on the back of ZTE PEEL to connect to Sprint’s 3G network.

ZTE PEEL will be available beginning Sunday, Nov. 14, through Sprint retail stores and direct ship sales channels, including Web sales (www.sprint.com) and Telesales (1-800-SPRINT1) for $79.99 (taxes excluded). The ZTE PEEL $29.99 monthly service plan from Sprint allows up to 1GB of 3G data on the Sprint network (taxes and surcharges excluded) with no annual contract required.

“ZTE PEEL unlocks the wonderful user interface and Web experience of Apple’s popular iPod touch and transforms it into a powerful mobile device using the Sprint 3G network,” said Fared Adib, vice president-Product Development. “When combined with Sprint’s 3G network, ZTE PEEL turns an iPod touch from a portable device limited by the availability of Wi-Fi to a mobility tool free to browse the Web and use applications anytime, anywhere while on Sprint’s 3G network.”

Key features of ZTE PEEL include advanced security through WEP, an internal antenna and compatibility with Windows® 7, Windows Vista®, Windows XP®, Macintosh® OS 10.5, 10.6. No software installation is required for use.

“ZTE is proud to continue to grow our relationship with Sprint, and we are excited to bring this ground-breaking product to Sprint’s already innovative portfolio,” said Joey Jia, general manager-ZTE USA. “We are committed to providing our partners with products that drive consumer demand and present a competitive edge.”

ZTE PEEL will operate on the Sprint 3G network, and customers can be confident in their ability to stay connected. According to the results of a 13-city test conducted by PC World on 3G performance, no one has a more reliable network than Sprint. For the second consecutive year, Sprint’s reliability rates were second-to-none.

PC World’s test involved Sprint, AT&T, Verizon and T-Mobile in 13 major cities in all regions of the country during December 2009 and January 2010. In all, roughly 9,000 individual tests of Sprint’s 3G service were conducted from 280 testing locations. Testing sessions were one minute in duration per location, and network performance can be highly variable from neighborhood to neighborhood. In laptop-based tests, Sprint tied with another carrier for first in 3G network reliability.2

With the Sprint Free Guarantee, customers can take advantage of ZTE PEEL for 30 days. If not completely satisfied, customers may return the device within 30 days to get reimbursed for the device purchase and activation fee, get the restocking fees waived, and receive a full refund for the monthly service plan charges.1