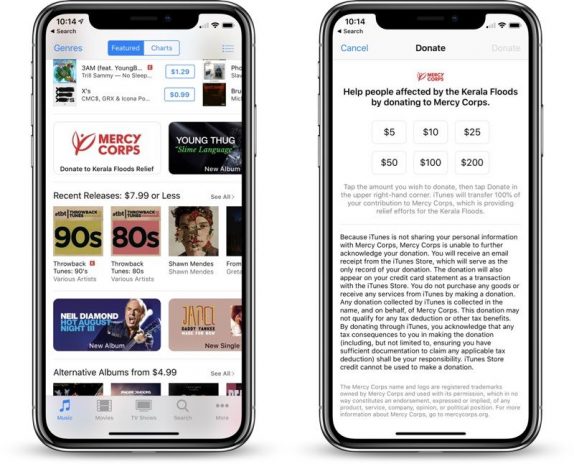 Apple today has updated banners on its App Store and iTunes Store on Mac and iOS devices in the U.S. requesting users to donate to Mercy Corps to support those who have been affected by massive flooding in Kerala. If you aren’t following, Floods in Kerala have effected a lot of districts in the state since August 8th.

With this new initiative, Apple is allowing customers to donate to Mercy Corps using credit and debit cards that are already on file with the iTunes Store and App Store for a no-hassle donation process. Users can donate up to $5, $10, $25, $50, $100, or $200, 100% of which goes to Mercy Corps. This isn’t the first time Apple has used iTunes or App Store to raise funds.

The company recently collected money on behalf of the American Red Cross to help fight California wildfires, and Apple has also collected donations for major disasters like the 2015 Nepal earthquake, the 2013 Philippines typhoon, Hurricane Sandy in 2012, the 2011 Japan earthquake and tsunami, and the 2010 earthquake in Haiti. As for Mercy Corps, it is a global humanitarian aid organization whose mission is to “alleviate suffering, poverty, and oppression by helping people build secure, productive and just communities.”