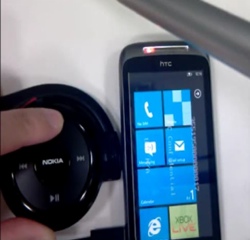 A tipster sent some information related to the HTC Mozart to WMPUser, the tipster sent them a video and a confirmed spec sheet of the phone. HTC Mozart has a Nexus One type look and it comes with 1GHz Qualcomm QSD 8250, with 512 MB  ROM and 8GB storage, 576 MB RAM, a 3.7-inch WVGA Super LCD display, 8MP CMOS camera with Xenon flash, and LI-PO 1300 mAh battery. The phone also supports Audio DSP with SRS and Dolby Mobile. The phone features European radio frequencies, which means it’s a good news for European folks. That’s all they know, but I think it’s good enough for folks who are looking forward to the Mozart, because the specs are satisfying. Are you happy with the specs? Tell us in the comment box after watching the video: