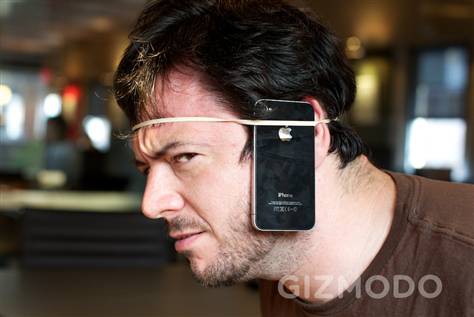 Before the launch of the Apple iPhone 4, I never heard of the antenna problem or reception issue in phones. I have used a lot of phones, and I never face that problem. Apple iPhone 4 is no doubt a very gorgeous phone, but what’s the advantage of all that if you can’t make phone calls. If you hold it in your left hands, you will lose the reception. I was reading yesterday that an Apple engineer, who’s an antenna expert told Steve Jobs about antenna problem before the release of the iPhone 4. So this means that it’s not an accident by Apple, they were warned. During the iPhone conference today, Apple announced that they will give bumpers and cases for free, which will help users to avoid the reception problem. But I can’t get one thing, why Apple is not accepting their mistake? Reason I am saying that is during the conference, Apple tried to prove that the antenna problem also occurs in phones like Droid Eris, BlackBerry Bold 9700, Samsung Omnia 2, and their very own iPhone 3GS, these phones are in market from a long time, and I believe that I never heard about reception problems in these phones. Then why Apple is trying to prove that? Because they want to prove it that antenna problem is common in phones, not only in iPhone 4, here you can see that Apple is not accepting their mistake. Steve Jobs also mentioned Nokia phones in the press conference, on which Nokia replies:

As we’ve all seen, Apple had mentioned Nokia in their press conference today regarding the iPhone4. I wanted to take a moment and send you a statement regarding Nokia’s own antenna design and function.

Antenna design is a complex subject and has been a core competence at Nokia for decades, across hundreds of phone models. Nokia was the pioneer in internal antennas; the Nokia 8810, launched in 1998, was the first commercial phone with this feature.

Nokia has invested thousands of man hours in studying human behavior, including how people hold their phones for calls, music playing, web browsing and so on. As you would expect from a company focused on connecting people, we prioritize antenna performance over physical design if they are ever in conflict.

In general, antenna performance of a mobile device/phone may be affected with a tight grip, depending on how the device is held. That’s why Nokia designs our phones to ensure acceptable performance in all real life cases, for example when the phone is held in either hand. Nokia has invested thousands of man hours in studying how people hold their phones and allows for this in designs, for example by having antennas both at the top and bottom of the phone and by careful selection of materials and their use in the mechanical design.

Nokia is trying to say that the antenna design matters more than the design of the phone, that’s why Nokia is #1 phone seller in the world, even though their phones are a bit dated and their UI is not awesome like iPhone or  Android, but you will never face any reception problem. But Apple thinks that phone design matters more than antenna design. I experienced one thing that whatever phone you are using, if you hold it with a tight grip, you will lose one or two bars, but no one hold their phone with a tight grip for a long time, most of the people only use their hand palm to hold the phone. Well, design matters, but core and most important components like antenna should be priority. Apple sold millions of iPhone 4  but Consumer Reports said that “we don’t recommend iPhone 4”, which means they don’t like it, why they dont like it? Because of the reception problem. I am not an enemy of iPhone 4, I really like it and it’s a gorgeous phone, but I don’t want to waste my hard money on a phone that doesn’t work well. Your thoughts are welcome, so please share your thoughts, and if I am wrong, then please correct me.