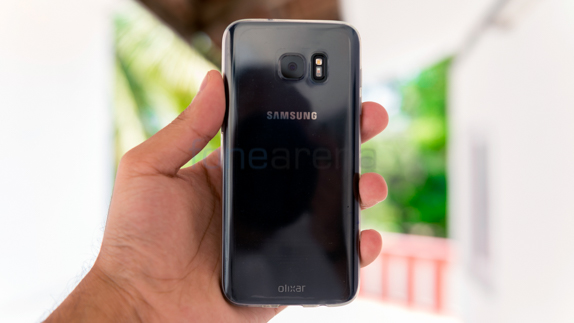 One of the main issue with cases these days is that they add too much bulk to the device. As a result, the shape, size and weight of the device which the manufacturer has spent a lot of time into perfecting goes to waste and you are left with a brick. That’s where thin cases come into the picture. While no case provides as great an experience as using the phone naked itself, there are some cases which provide an experience close to that and the Olixar case is one of them. Let’s take a look at the case in detail. 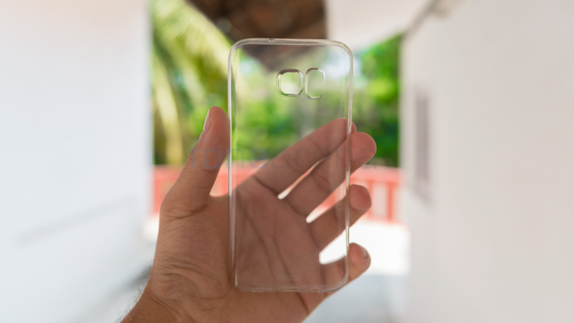 The Olixar Ultra-Thin is a really minimal case as its name suggests. However what sets it apart from most other thin cases are two things. Firstly, you have proper protection for the top and bottom of your device. There are several thin cases out there that leave the top and bottom portions unprotected including some of Samsung’s own official cases. Secondly, this thin case is made of a mix between gel and silicon while most other thin cases are made of plastic.

The case covers the entire back surface and sides of the phone while leaving cutouts for the various ports. The volume keys too are covered but unlike most other gel cases, the case does not make them harder to press. The case is transparent and as a result, can blend in easily with any of the S7 Edge colours however, there is a dotted pattern at the back which some people may or may not like. I personally, fall in the former category as I think it brings a bit of freshness to the glass back.

One good thing about the cutout especially for the 3.5mm and microUSB port is that you will be able to connect even a wider audio or microUSB cable without having to remove the case which happens in many other cases. One of the only negatives of the case might perhaps be the dust collection under the case. However, considering that both the phone and the case can be washed, we feel that it isn’t a dealbreaker as such. 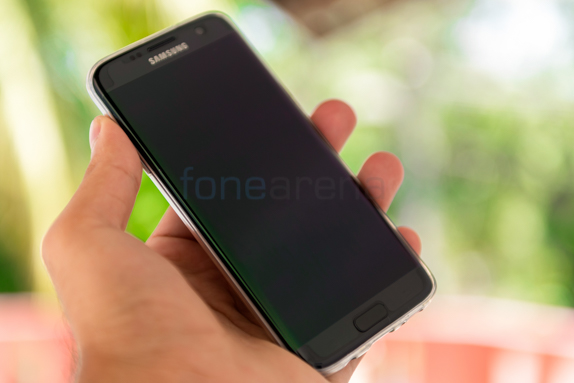 I personally am not someone who generally likes gel or silicon cases. I think they mostly give a cheap or inferior feel compared to hard plastic or leather cases. However, I was quite delighted with the feel of the Olixar. One of the main reasons for that is probably due to the fact that it preserves the shape of the S7 Edge and doesn’t flex around or slip off the phone like on some other gel or silicon cases. Secondly, the case also gives additional grip whether it is in your hands or on a surface such as a table which secures the phone from slipping off.

Like I mentioned earlier, the case covers the top and bottom well which is a big bonus for me as I personally leave the phone in the cup holder for instance and if there was no protection at the top and bottom, it is easy to get your device scratched. So in terms of protection from scratches, the case has you fully covered. In terms of drop protection, the case may not fare well compared to larger cases that can take quite a beating. But with the Olixar case fitted, you feel like the phone might survive small drops since the gel material could possibly absorb some of the shock from the fall. i don’t trust thin plastic cases with drops as I feel the case will just transfer the impact onto the phone itself. So while the case does provide some basic protection, we recommend that you still be careful when using your phone. 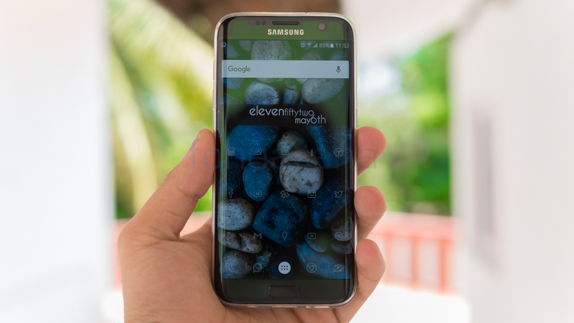 Prior to using the Olixar, I was using the Spigen Neo Hybrid for the S7 Edge but I always found it too bulky. I have big hands but I really love the way the S7 Edge feels in the hands and I needed a case that really emphasises the phones design. The Olixar case does just that and also protects your phone at the same time. It also offers really good value for money since it costs just US$11 or GBP 7.99 or Rs 647.99. You can get the case on MobileFun and they’ve shipping worldwide including USA, UK and India.