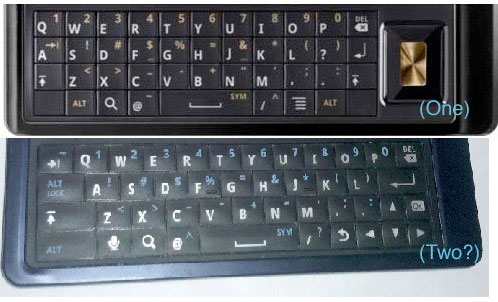 There was some news earlier today that the Droid2 had appeared in Verizon’s inventory. Since we really don’t bother much about inventory blurry cam shots , we decided to wait for further info and now there is a image posted on HoFo which shows the improved QWERTY Keyboard  on the upcoming Droid2

The Keypad on the Droid has a D-Pad on the right side. This might soon be history as this might be replaced by Arrow keys in the Droid2.This is pretty similar to the way Nokia did similar stuff to the N97 and N97 Mini.

Also we spotted a OK button next to the arrow keys. Also there is a new ALT Lock button which might let you type numbers ot symbols more easily.

Another interesting thing is the Dedicated Voice Input Key.  I really love the fact that I can choose to use Voice Input on the Nexus One across the Interface.  A key dedicated to this functionality should be cool.

Do you like this new layout ?  Will you be happy if it went official ?

And its pretty clear by now that the Shadow and Droid2 will be two separate devices from Motorola.