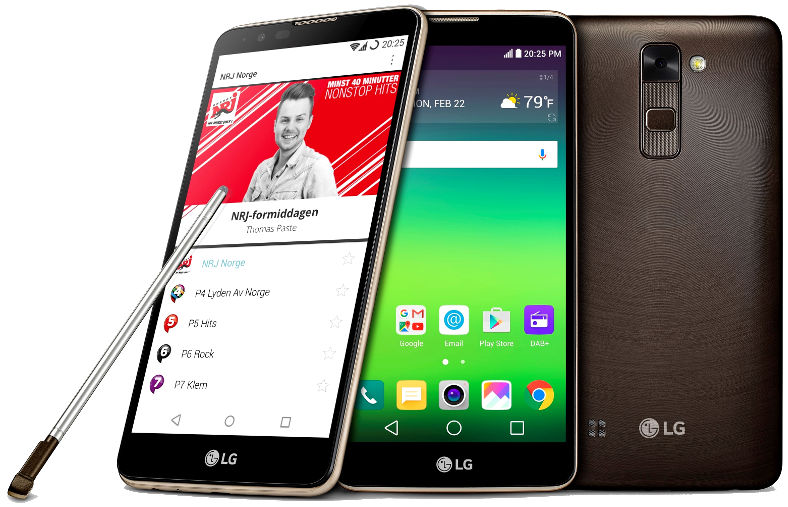 LG today announced a new Stylus 2 variant as the world’s first smartphone to feature DAB+ for digital radio broadcasting. It has introduced the new smartphone at Radiodays radio conference at Europe 2016 in Paris. LG said that it has collaborated with the International DMB Advancement Group (IDAG) to include DAB+ technology in the new LG Stylus 2.

The new variant of the LG Stylus 2 features a DAB+ chipset and an exclusive app that lets users to enjoy digital radio broadcasts out of the box. LG DAB+ is expected to replace FM analog radio and already reaches over 500 million people in 40 countries around the world.

“A technical interface also enables broadcasters to develop their own tailored apps in which internet services complement broadcasted radio. Users will be able to access more radio channels with DAB+ than traditional FM. Unlike regular radio apps that stream large amounts of data, DAB+ radio provides excellent audio quality for free, as it uses no data,” said LG.

The new LG Stylus 2 with DAB+ will first roll out in Australia, Belgium, Germany, Italy, Netherlands, Norway and the United Kingdom. No details about the price yet.

We are taking a proactive approach towards the fast-paced technological shift to digital broadcasting with DAB+ to deliver a new paradigm of experiences through the smartphone. With its large 5.7-inch screen, 1 watt speaker and 3,000mAh removable battery, the LG Stylus 2 is the perfect device to enjoy rich, multimedia content.

We are proud to help introduce a game-changing smartphone with an innovative company like LG. The combination of broadcasting and the internet opens up a vast array of possibilities for the future. Consumers get new functionalities and media companies reach new audiences with more broadcasted free-to-air radio.