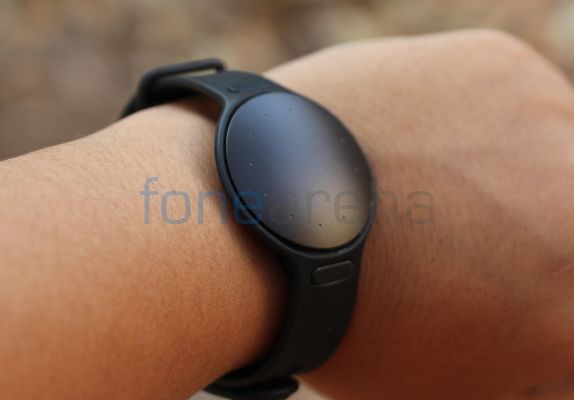 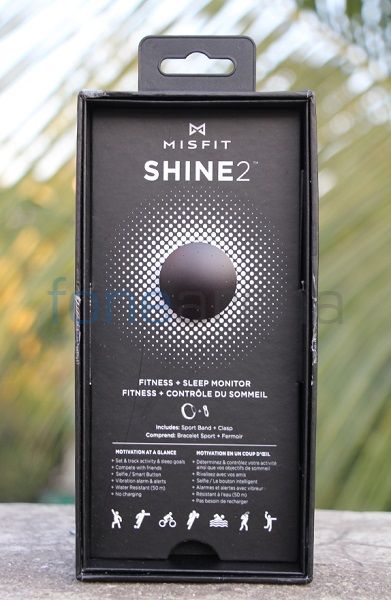 Misift had entered India in September last year with the Shine fitness tracker which we have already reviewed. The company introduced the Shine 2, second generation of the fitness tracker and sleep monitor in October in the US for $99.99. We have got our hands on the Shine 2, so let’s see what does it has to offer and if the device is worth its price tag of $99.99, in this review. 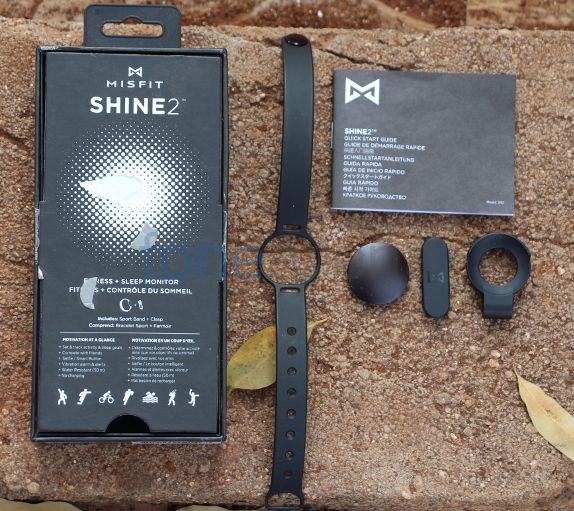 The Misfit Shine 2 box comes with : 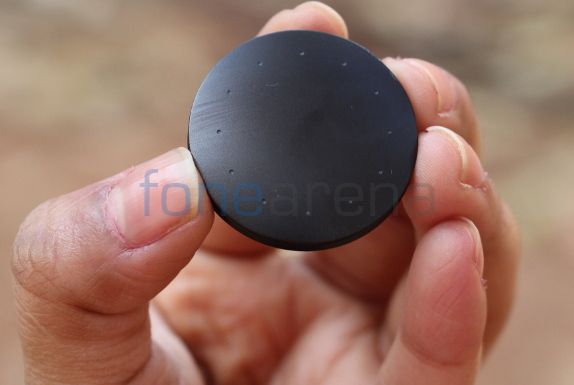 First thing you will notice about the Shine 2 is that it has become a lot slimmer than the original Shine. The Shine 2 which is round in size measures 8 mm thick and a diameter of 30.5mm. Along with becoming slimmer, the device is also lighter and weighs just 8.5 grams with battery installed. 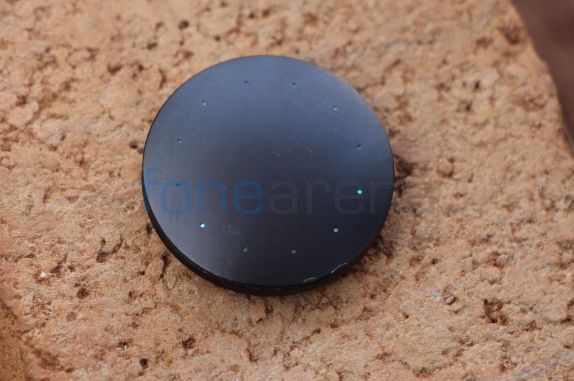 The device is made of anodized aircraft grade aluminium and has no display and buttons. There are 12 multi-color LEDs on the Shine 2 that are embedded on the metal itself and they will lit up in various colors such as red, green, blue and white at the time when the device is syncing with the app. Double tapping on top of the device shows how far along you are in respect with your daily activity goals with the help of these LEDs.

In addition to your daily progress, the Shine 2 also shows you time, which is not easy to decipher at first and you will have to refer the manual book. After double tapping the device, it will emit four reference lights for 12:00, 3:00, 6:00 and 9:00 and then the hour LED will be bright while the minute LED will continue blinking. This feature is not convenient and in no way acts as a substitute for a watch. 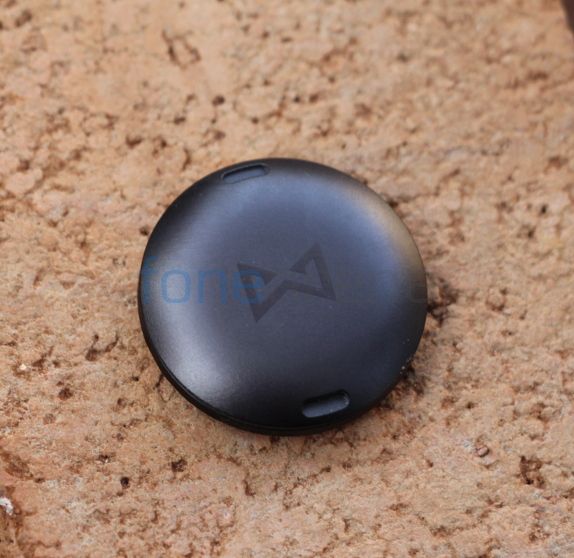 At the back, the device has the Misfit logo and two gaps to fit the clasp with the rubber sport band. Unlike the Shine, the Shine 2 comes pre-installed with the coin-cell battery that requires no charging and is replaceable. 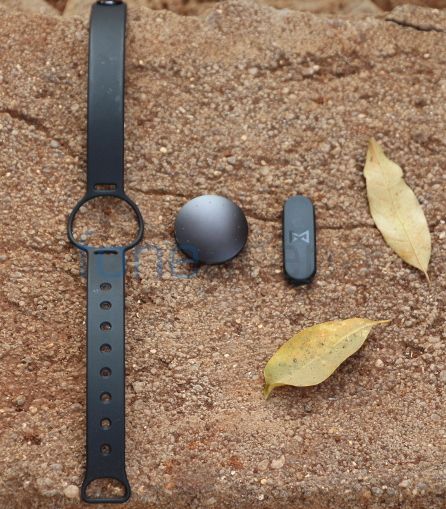 You need to use the action clip if you are wearing the Shine 2 with the sport band as it gives it the additional support and holds the device firmly. This action clip sits at the back of the Shine and anchors itself from both the sides in the rubber sport band. You have to be a bit careful while wearing the device as it can be easily misplaced while doing daily tasks like taking off a jacket.

The rubber sport band is pretty decent and has become broader than the original Shine. However, I still think the band and especially the rim that holds the Shine 2 should be stronger and not flimsy. The device pops out easily from the rim with minimal force and you may not even recognize that the device has been misplaced. 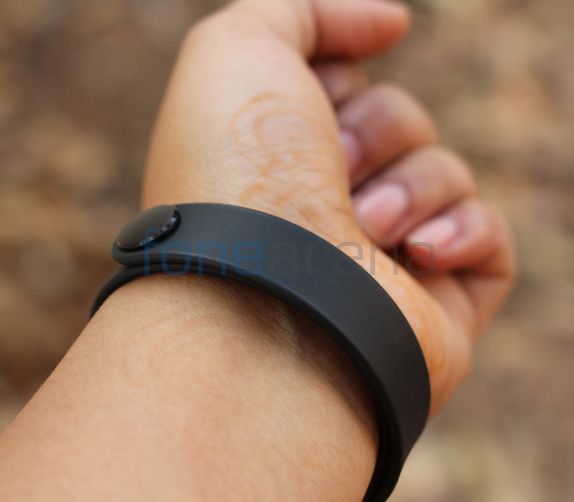 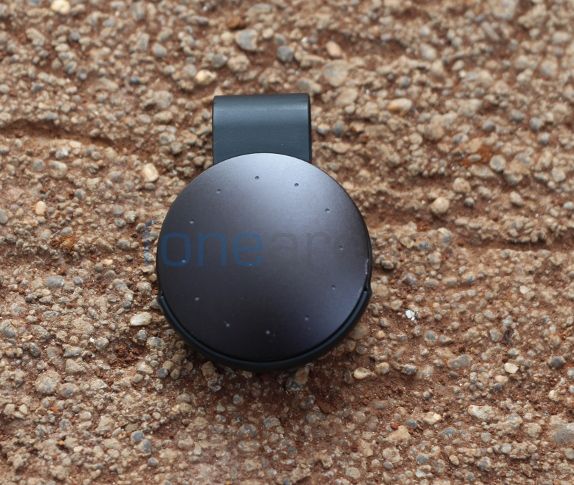 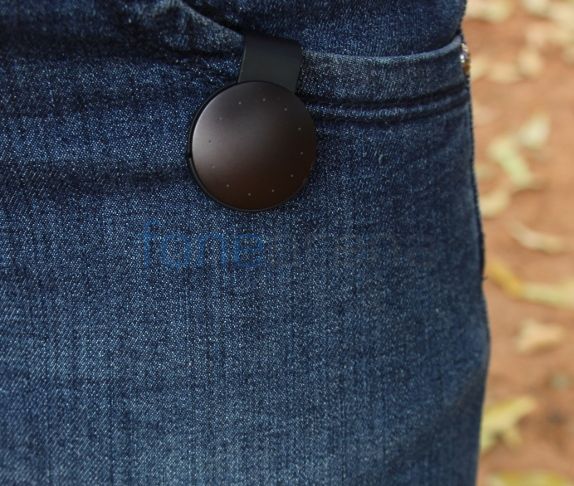 You can easily attach the clasp to shirt, belt, shoes or even your jeans pocket and it will still do the tracking for you. 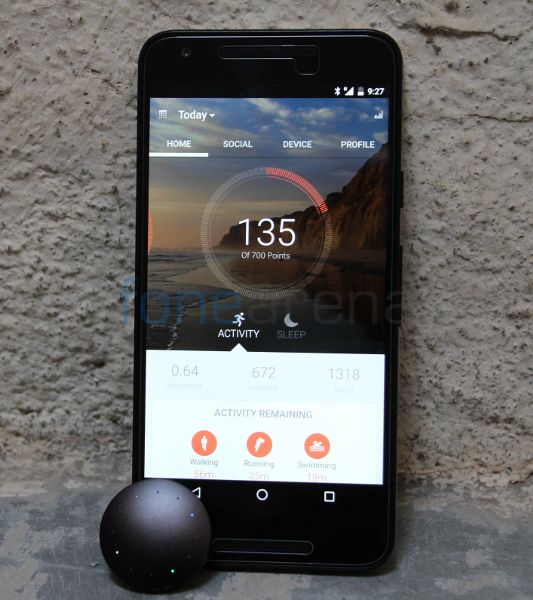 After installing the app and providing all the necessary information like age, weight and height, you are good to sync the app with the device. The device is compatible with iPhone 4S and higher, Android 4.3 and higher and Windows 8.1. We tried the Android app in our testing period. Similar to its predecessor, the Shine 2 measures your steps, calories burned, distance covered and sleep quality and duration. You have to manually sync to get the data from time to time to get the update and this syncing process has improved and takes less time now. 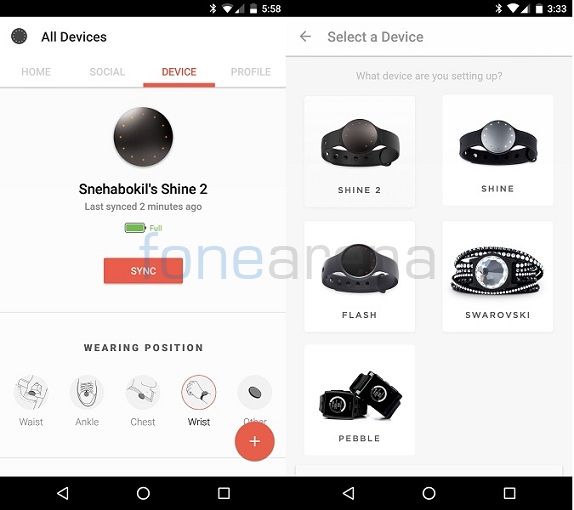 After setting your daily goals the Shine 2 will let you know how far have you reached on a specific goal with the help of LEDs.  You can either double tap the Shine to visually see how much progress you have made throughout the day or you can use the app to view more detailed data.  4 red colored LEDs suggest 25% progress, 10 LEDs suggest 75% and all the 12 will lit up when you accomplish your goal. 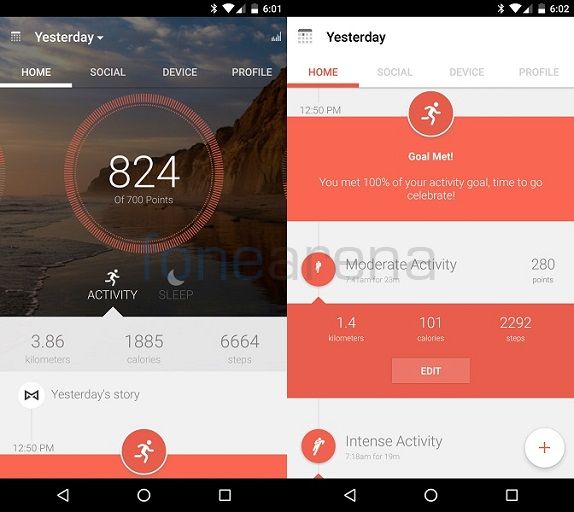 The Home section of the app offers you all the information of the daily activity in the form of distance, calories and steps. It is a letdown that Misfit has not refreshed the app and is still sticking to the original UI. The app shows your daily progress in terms of points and you can see the daily points on the big round dial that has an orange-colored dial which also shows how near are you from your goal. I have mentioned it in the earlier review as well that I am not a big fan of the point system as it shifts the focus from the main results like steps taken and calories burnt. The app divides the activity goal in “light”, “moderate” and “intense”. 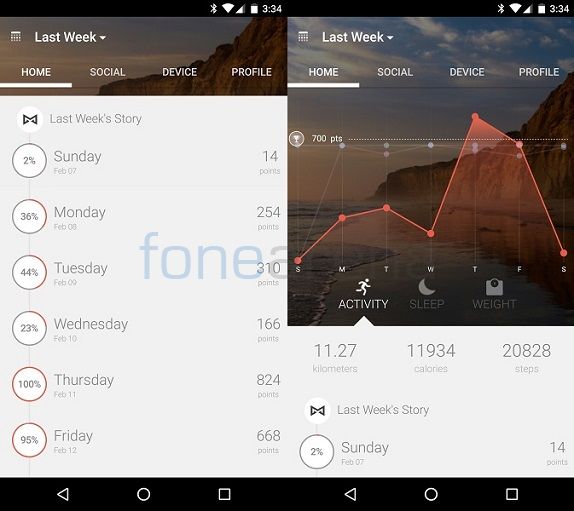 Swiping left will show your stats for a day before and you can choose to see your progress by day, by week and by month. It also depicts the daily progress with graphs. You can also take a look at a weekly overview of your activity, which also compares your achievements to the previous weeks.  You can even add your own activity like cycling, soccer, dance, tennis, basketball, yoga and so on with the floating ‘+’ button at the bottom corner. I found the calories burnt feature heavily inaccurate as no way a simple 3-4 km jog will burn over 1000 calories. 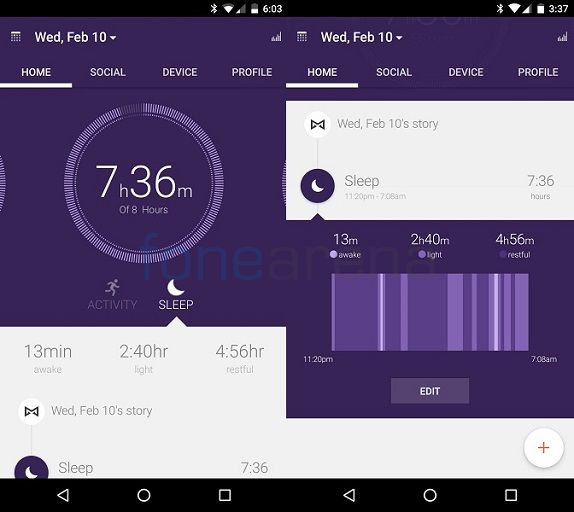 Coming to the sleep tracking, I feel the automatic sleep tracking has improved and it does get it when you are sleeping. It divides the data into awake, light and restful. The device still lacks to offer in-depth information like deep sleep and sleep patterns. However, the sleep counting has become pretty accurate and gives you almost the correct information. 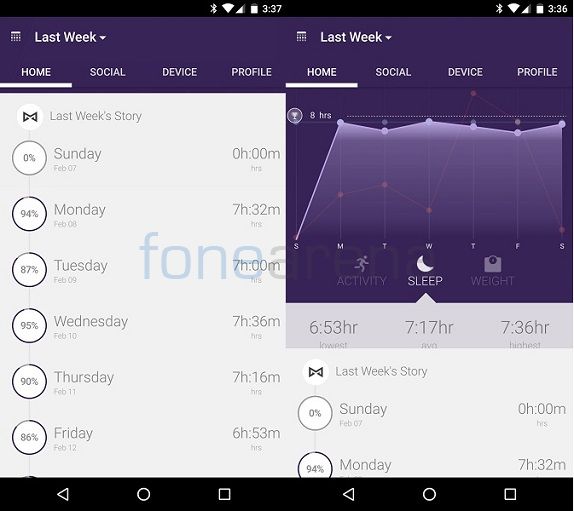 Similar to the activity tracking, the app offers sleep tacking by day, week and month. 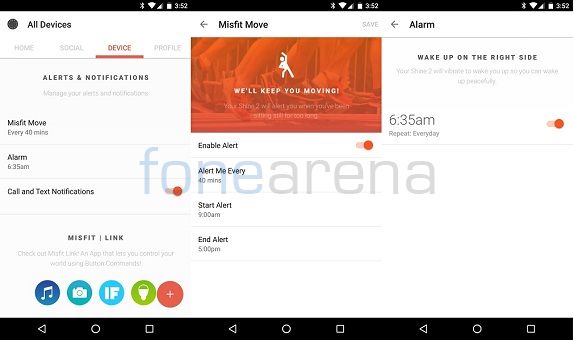 One of the many welcome additions on the Shine 2 is the ability to set an alarm thanks to the vibration motor. Next up, once you enable the Misfit Move feature on the app, the Shine 2 will alert you if you are sitting for too long. You can manually set the time for the Misfit Move alert. Finally, the device gets the ability to alert users at the time of incoming call and text notifications. 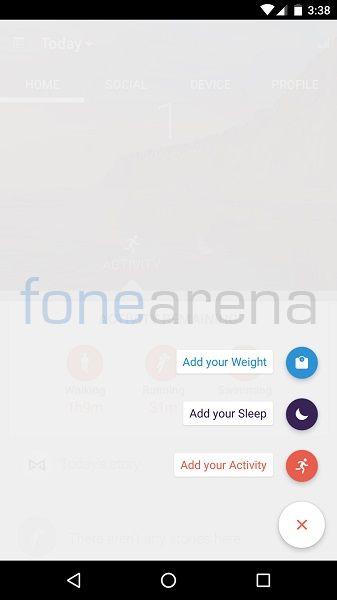 The floating action button at the bottom right corner still lets you manually add your weight, activity and sleep. Similar to its predecessor, the Shine 2 is also waterproof up to 50m which means you can use it for swimming, take it in the shower and even sustain your workout sweats. In addition, you can connect Shine 2 with Misfit Link to control music, take a selfie and so on. 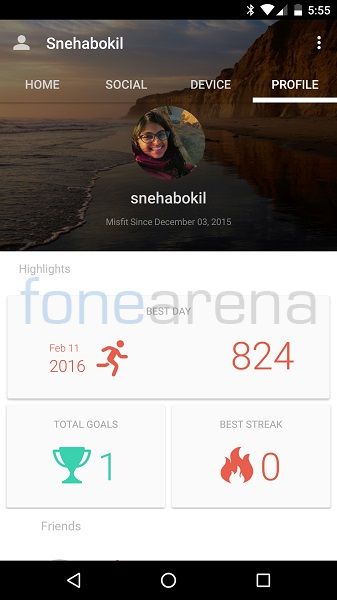 The app comes with a social element and lets you sync up with friends who are also using the tracker and compete with them for the top spot on your fitness leaderboard.

As mentioned earlier, the battery in Shine 2 is a coin cell battery that Misfit claims lasts up to six months. You can easily replace the battery once it is dead.

The Shine 2 is definitely an upgrade to the original Shine in terms of design and features. However, a heart rate monitor could have been a nice addition to the device which costs $99.99. One of the biggest drawbacks of the device are it’s fairly basic accessories like the clasp and the rubber sport band which is not enough to give the Shine 2 the protection it needs for carrying it around safely. But again, if you are just getting into the fitness tracking scenario, the Misfit Shine 2 is a good option but there are other options in the market that will do the job for you in a much cheaper price. The Misfit Shine 2 is not available in India yet and it is not known when it will be available in the country.

[Update] – Misfit has launched Shine 2 and Ray Fitness trackers in India exclusively on Amazon.in. The Shine 2 rel=”nofollow” is priced at Rs. 7495.