Microsoft has rolled out internal beta for Upgrade Advisor for Windows 10. The app will help users know if their phone is eligible for a Windows 10 upgrade. 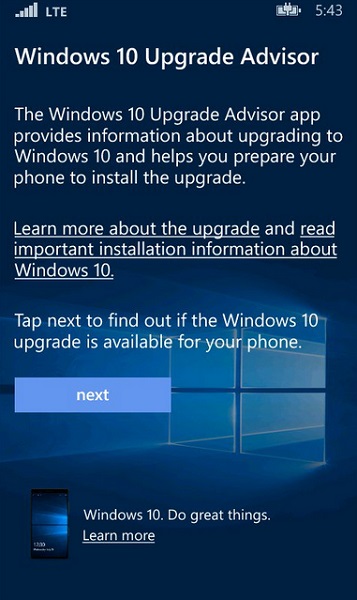 Microsoft had earlier planned the Windows 10 Mobile upgrade for old Lumia devices in December. However the release has been delayed and now it seems that the company could soon roll out the upgrade. The app listing on the Windows Store says that “When you open the app, it checks your phone and lets you know if it’s eligible to upgrade, if an update is required before you can upgrade, or if your phone can’t be upgraded.” In addition, the app will also clear room on the device for the new files and will recommend files, such as videos or photos, that can be temporarily moved to OneDrive or an SD card.