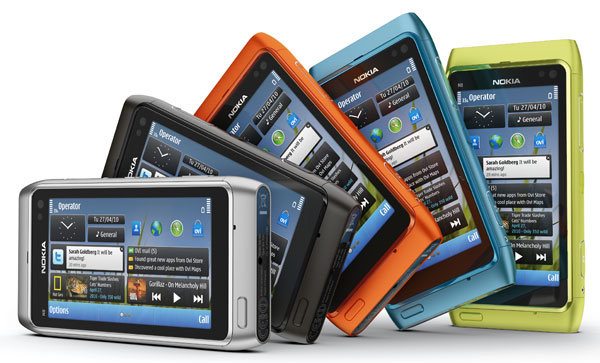 And then came the N8. Silently announced on Tuesday, April 27th, it raised a lot of Eyebrows with a Series of fantastic new Features and great Specs. And in my Opinion, it also looks great. My following Points are made entirely of what i saw on the Internet so far – I did not see the N8 in the wild so far.

Gotta say one Thing though, it’s a shame that the N8 did get bashed the Day before the Launch. I would’ve appreciate a basic Review, about what we can expect, but not a simple bash, based on a Proto Device that got leaked about 5 Months before the actual Release Date. Neither Hardware or Software is near Final, so how the Heck would you know how the actual Retail Device will turn out to be, Mr. Eldar? I followed your Work for a long Time, but this Time you really messed up, it killed the Anticipation for the N8, your Words have affected a lot of Guys i talked to, without an actual Point. Disappointing Eldar, really disappointing, this screams unprofessional.

Well, back to the N8 again, seriously, how awesome does this one look? I’m not big on Designs normally, and as long as the Insides are great, i can live with an ugly Device as well, but the N8, for me, does both. My Colour of Choice? Orange. Fits like a Glove, looks fantastic, and it will be mine for the following Reasons:

12 Megapixel Camera with Xenon Flash + 720p HD Video Recording: Ever since the N82 became slowly outdated, i begged for a worthy Replacement, and here it is. I know Megapixels aren’t everything, and Nokia obviously listened to us, by giving us a bigger Sensor as well. First Sample Pictures already look fantastic and with the Xenon Flash, you should be able to get a fantastic Imaging Experience. When it came to Camera Comparisons, Nokia  has always won in my Book, and judging from the Samples, Nokia pulls this Win off as well! Another first here, is 720p HD video recording. Have you seen that Video Sample? Holy Smokes! So its not like at Sony Ericsson, where i have to pick either Imaging or Video Device, i just have both. Love it!

Symbian^3: Yes, i admit it, although i rambled a lot about Symbian in the Past, i like the Fact that the N8 comes with Symbian^3. Why? Well, its simple, let me explain: I know most of you would’ve rather seen Meego than Symbian. Symbian^1 was a Disaster and had a lot of Mistakes and Dont’s. But what Nokia did was giving us Symbian^3 and from the Videos (and the class People of Symbian on Twitter), it seems like most of the Mistakes are erased. I absolutely ran wild on the crappy Single/Double Click Situation in the OS, and according to Symbian, its all gone and everything is Single Click. It’s also obvious that the UI got a big Speed Boost, so alth0ugh only 680MHz, the Experience should be a good One. To wrap up the Symbian^3 Part: I’d rather take a working, good running Symbian^3, than a half-assed Meego Release, cause we all knew where it leads to, when you bring out something too quick! (see: N97)

On Top of that, the Nokia N8 brings some cool new Features in the OS, which are such simple Things, but never made it to previous Models. For example: Smart Dialing = Dial the Number that corresponds to the Letters he starts with, and the Phonebook automatically start to search for the Contact. Simple Feature, been in E-Series for a long Time, makes Life a lot easier. Or how about the rumored Facebook Integration? Wouldn’t it be awesome to send a Direct Message to one of your Facebook Contacts, directly from the Contacts App??

Or how about the new, 3 Homescreens? Or how about separated Mail Widgets for each Mailbox you have set up on your Device?! Pinch & Zoom in not only Pictures, but Web Browser and more? The Music Player also got a nice Overhaul, complete with Coverflow Integration, which is awesome for every Music Lover! Another Feature that needed a Major Overhaul is the rather crappy Multitasking Menu from Symbian^1. The new Menu features some very nice Previews of the Apps that are currently running, making the whole Experience a lot better! Man, i can’t wait to try this!

Display Solution: 3,5″ Screen. Capacitive. Multitouch. I can’t tell you how glad i am that Nokia went away from the resistive Screens and is now working with those Kinds. Say what you want, but i still think Capacitive Screens are far superior than resistive Ones. I remember with Horror of the first Screens they used in 5800 or N97. It got a lot better on N900, in fact that was the best resistive One i used so far. However, i still consider capacitive as my favourite Kind of Display. I could now go on and rant about having “only” nHD Resolution (640×360 Pixels) on the N8, instead of WVGA (800×480 etc), but i doubt one would notice really. Oh and have you heard? They use OLED Screens on the N8, so crisp Colours and a better Battery Life should be assured. Bravo Nokia, Bravo. 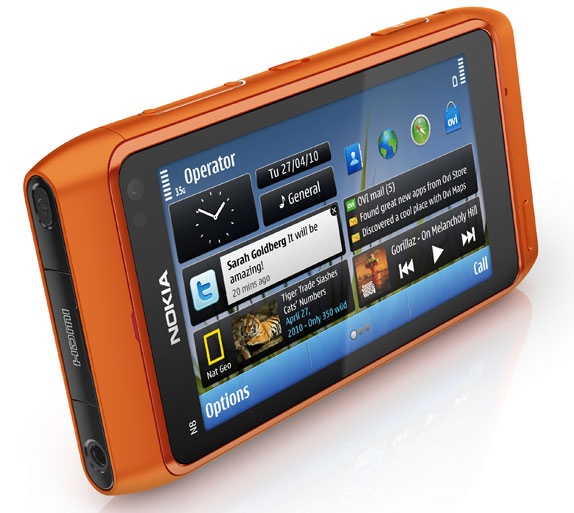 USB on the Go/miniHDMI Connector: Both of those Features i consider as  a definitive Win. The Possibilities are endless. Watching 720p Videos you did with your N8, or the Pictures in high Resolution on your Flatscreens? And here the absolute best Part for Movie Freaks like me: Support for .mkv-Files, which is normally used for HD-Rips. This, and hopefully Divx Support should make the absolute Entertainment Package for me. Whats USB on the go, you ask? Ha! Glad you did. USB-on-the-Go is an Adapter+Function that enables you to connect your external HDD (with external Power Supply) to your Nokia N8 and browse the Files you have on there, directly from your Phone. I mean seriously, how awesome is that?

WebTV: Another interesting Debut will be the WebTV Service that Nokia is now offering. On-Demand Content from CNN, Paramount or National Geographic on your Phone sounds pretty handy and I’m eager to try this out. Could be Lots of Fun when on the Road..

Material Choice: Go away filthy Plastic! The Nokia N8 is made of one Piece of Aluminium. Besides of good Looks, this guarantees, that the Phone will be extremely solid and well made. I can’t wait to feel that. I’d take Aluminium over Plastic any Day of the Week and here’s hoping Nokia keeps that up on future Releases as well! But, that Form Factor Choice brought a Downside with it, and you will read down below, what that is.

Okay, so those were some of the good Points i see from the Nokia N8. It may sound a bit fanboy-ish but i have to admit that its been a very long Time since I’ve been THAT excited about  an upcoming Phone, let alone from Nokia. However, looking through the Specs Sheet, i also found some Headscratchers, like:

Processor: Here where i live it’s 2010 already but i don’t see that from Nokia’s Choice to only put 680MHz in the N8. Symbian^3 is a lightweight OS i’ve been told, and maybe the Space isn’t too much with the big Cam Part and whatnot, but it could be really more. I don’t know how real-life performance will look like, especially with loads of Pictures, Music and whatnot loaded, but.. I don’t know. I was just hoping for a bit more Juice. I just hope the Battery Life will deliver, for the Sake of a faster Processor.

Built-in 1200 mAh Battery: Did Steve Jobs buy Nokia or what? Okay, its another Thing about the Space here, but there are far better Solutions in my Opinion. You can not access the Battery in Case something happens, and 1200 mAh are not exactly a Burner. This could’ve done better Nokia.

Nokia is pretty late: I think I speak out what everyone thinks here. Nokia really is far behind. Not only in bringing out a Camera Flagship Device, but rather in impressing People. Looking through Nokia’s current Portfolio makes me think which Year it is. The only Device that attracts me as far as i would buy it, is the Nokia N900. And then what? Sure, X6 or C5 are also quite nice Devices, but are those able to compete with iPhone or HTC Desire? Hmm, i dont think so. And now the N8 is even delayed and only supposed to come out in September. Ouch. With the Frequency at which HTC is currently blasting out awesome Phones, one can only think what they have in Store, at the Time when Nokia starts shipping the N8, let alone Meego Flagship Hammers. For me it’s clear, Nokia needs to work faster, more accurate in Order to reduce the Time from the Launch of the Device, to the actual Release. It’s just too much currently, and i seriously hope the N8 and following Phones will not disappoint.

So far, this is my Take on the Nokia N8. Of course the Processor/Battery/RAM are not exactly groundbreaking, but on the other Hand, Nokia never said that this is going to be THE next Flagship by any means.. It will be the new Imaging Jesus Phone of Course, but I’m confident Nokia has some more hot Irons in the Fire, which will have Upgrades in above mentioned Departments.

The Nokia N8 will be my next Phone. I say it as it is and admit that i fell in Love with it, at the Moment it was launched. (or even when it leaked). It has a sensational Piece of Camera, (should) have great Build Quality and with a capacitive Screen and sorted out Symbian OS, this Thing scores big Time with me. The Advantage over Meego I have (for now), that eventual Bugs are sorted out and all my Apps should run just fine. Besides that, I’m a Hobby Photographer and love to snap quick Pictures wherever I am, and the N8 seems to be perfect for doing that.