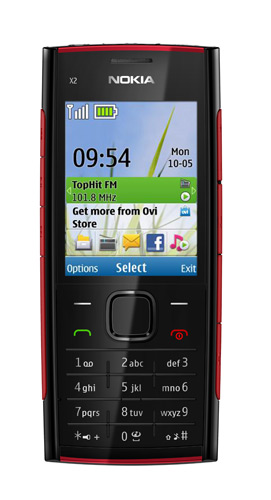 Nokia has just announced the X2 – the latest member of the X-series range. Looks like Nokia is back in the business of  launching new phones.  The X2 will hit stores in end of June . Nokia fans are all still drooling about the N8 and the X2 comes as a surprise

The phone seems to run on Series 40 and is aimed at providing a no-nonsense value for money phone to emerging markets like India.

The X2 will be available by end of June at a price of Rs.5000 approx or roughly about 85 euros before taxes.

This phone is being launched in India first and might be Nokia’s mission to take on handset makers such as Micromax , Spice etc.