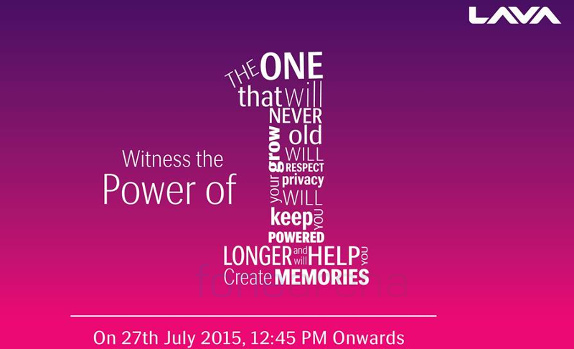 Lava has sent out invites for a new launch on July 27th. The caption in the invite reads Witness the Power of the one that will never grow old, will respect your privacy, will keep you powered longer and will help you create memories. This is likely to be the launch of Lava’s first Android One smartphone that was supposed to launch on July 14th and was postponed later.

Lava Iris X5 4G could be Lava’s upcoming Android One smartphone that surfaced on GFXBench last week. According to the leak, the smartphone will feature a 5-inch HD display, powered by 1.3 GHz Quad-Core MediaTek MT6735 processor with Mali-T720 GPU, come with 2GB RAM, 16GB of internal storage with expansion slot memory, 13-megapixel rear camera with LED flash, 8-megapixel or 5-megapixel front-facing camera and 4G LTE support. It will run on Android 5.1.1 (Lollipop).

According to earlier report, the smartphone is expected to be priced around Rs. 12,000. We should know all the details about the Android One smartphone on Monday.