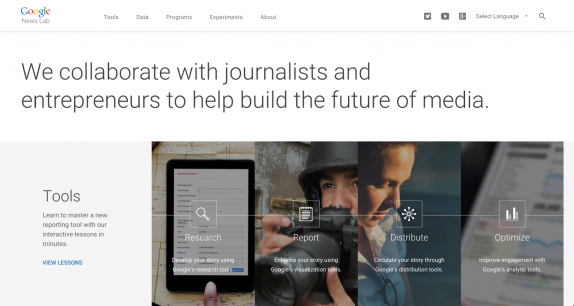 Google’s new effort to empower innovation for the Internet media is its new portal called News Lab. The search giant introduced this new site on Monday saying that it is aimed to collaborate with journalists and entrepreneurs to help build the future of media.

We’re also working with partners to build a series of programs focused on imagining the future of news and information, as well as on empowering new voices in media. One of the opportunities we’re focused on is increasing the number of media startups in the marketplace.

Additionally, Google says that the company has focused its programs on is citizen reporting as well. Now when the mobile technology allows anyone to be a reporter, Google wants to ensure that user-generated news content is a positive and game-changing force in media. As of now, the company is working with First Draft, the WITNESS Media Lab, and the YouTube Newswire for the same.

For News Lab, Google is starting with the teams in the US, UK, France, and Germany. It is also powering the training and research arm of Google’s Digital News Initiative in Europe.