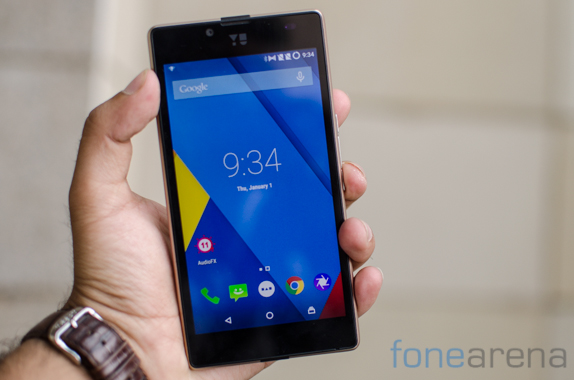 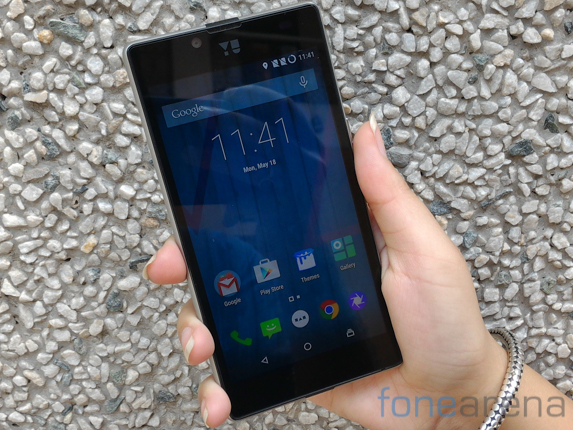 Differentiation is the name of the game when it comes to budget hardware. Yet, caught within this dichotomy of price and quality, most brands end up being rather generic in their offerings. Yu, a spinoff from mass market brand Micromax, is taking aim at the internet savvy, young audience that wants cutting edge features at a budget price. Sounds like Xiaomi, Lenovo and the myriad other brands out there? Well, Yu has a trick up it’s sleeve and it is called CyanogenMod. Through the course of the review we’ll take a look at the hardware, the software and also how both interplay with each other to try and create a compelling offering at a low end price. Follow along to see what we find out.

The Yureka is far from the most original design on the block. That said, taking inspiration is quite common in the industry and more so amongst Indian OEMs. This can and has lead to better looking phones in the budget category which is quite true here. The Yureka can be described as a device that quite resembles the Nokia Lumia 830 and perhaps even the 930 and incorporates metal in the build which is a definite positive. 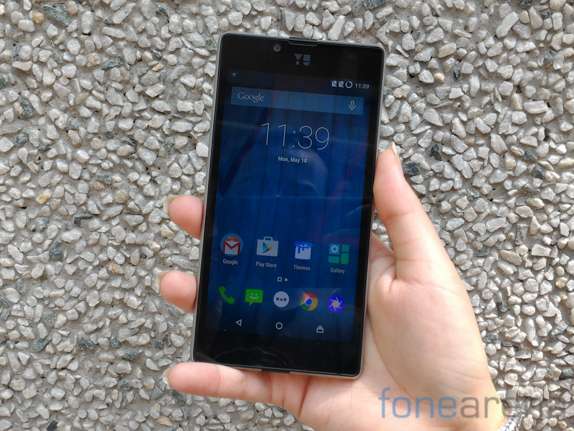 While mostly plastic, a metal trim runs around the edges of the phone making it a bit more secure against falls compared to the competition.  The front of the phone has a 5inch IPS panel and relatively discrete Yu branding on top. A Gorilla Glass panel for a modicum of protection covers the display. 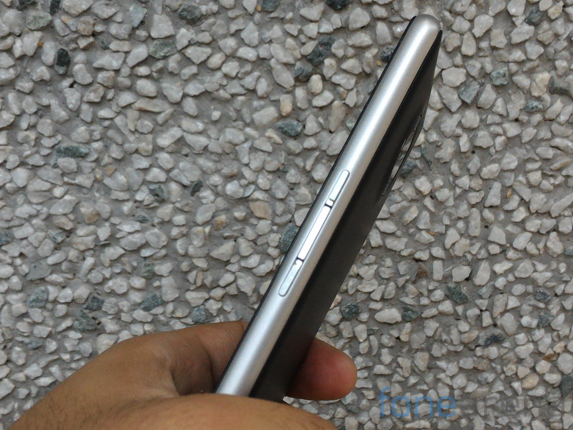 Over on the right of the phone you’ll spot the power button sandwiched between the volume rockers. These buttons offer good feedback but the volume rockers have a bit of wobble to them. Not enough to be a cause for concern but definitely something that Yu should be looking at fixing in future batches or hardware revisions. The left side is bereft of buttons. The top and bottom of the handset have plastic bits that segregate the metal trim in two halves. The 3.5mm audio jack and the microUSB connectors are placed in the upper and lower edges respectively. 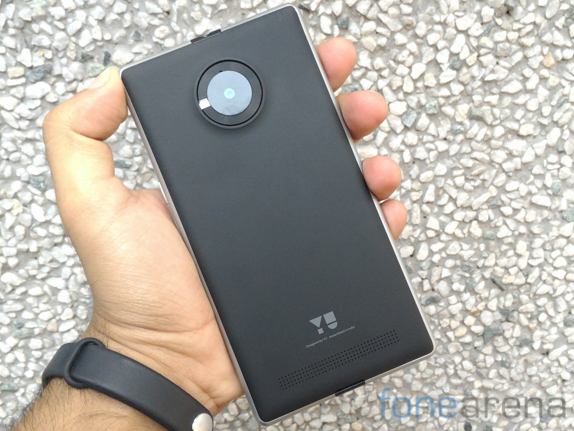 At the back you come across the much talked about Saturn Ring design. This is really just a metallic ring running around the camera module. Yu has stated that it plans to incorporate this in all upcoming Yu handsets. The rear is otherwise mostly clean with subtle Yu branding at the bottom and a speaker grille. 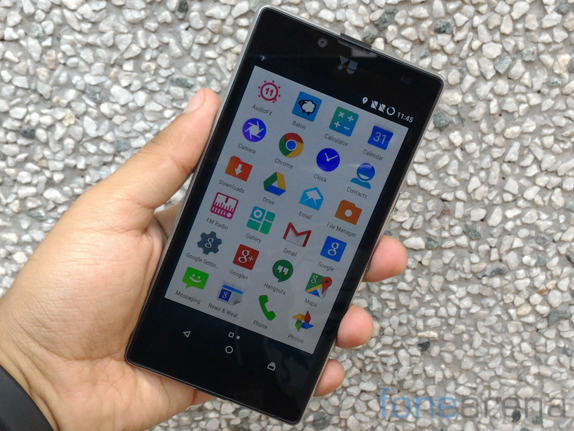 The Yu Yuphoria is honestly better built than we expected. It doesn’t really touch the rock solid status of the Redmi series of phones but comes quite close. The metal trim helps elevate the hardware to a stature above it’s price and the plastics quality isn’t too bad either with the exception being the rear plastic shell but we’ll talk about that later. The handset weights 143 grams and measures 142.3×73.9.35mm, which makes it a reasonably compact phone.  You might not wax eloquent about the hardware or design of the Yu Yuphoria but at Rs. 6,999; it is certainly hard to be disappointed by it.

For a lot of prospective buyers, the software onboard the Yu will be the deciding factor. CyanogenMod has long been the after market ROM of choice for the surprisingly large number of people dipping their fingers into the ROM flashing game. Well polished as far as custom ROMs go, Cyanogen 12 has fast evolved from an XDA project to a separate company tying up with OEM partners. Yu is one such partner with the Yuphoria being the cheapest phone out there to officially run Cyanogen 12. The current version is based on Android 5.0.2 and at its core it can almost be considered as stock Android if that’s what you wish. 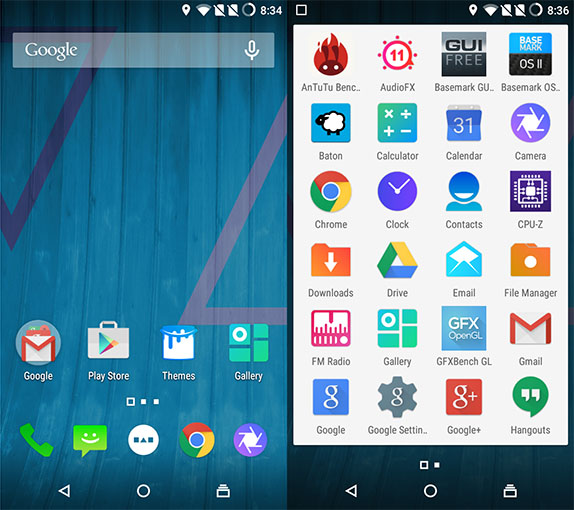 The magic lies in the settings on offer here and there really is enough here to satisfy the most ardent of customization aficionados. From gestures to opening apps to changing navigation layouts, there really is nothing that you can’t configure here. 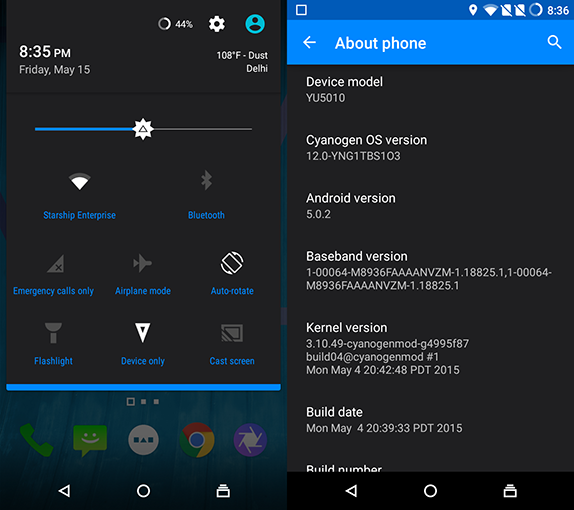 While the number of options here might appear to be daunting, it is certainly possible for the average user to navigate the handset without much trouble. There’s not much in terms of pre-loaded applications.  AudioFX with its equalizer settings, Yuniverse as a browser and a fairly feature rich app as Boxer are pretty much all that you find installed on the handset. The UI navigation is bog standard and there’s really not much to talk about on that front. The software is also very well optimized for the hardware resulting in a surprisingly good experience. More on that in the performance section though.

Powering the Yu Yuphoria is a 1.2 Ghz Quad-Core Qualcomm Snapdragon 410 processor paired with 2GB of RAM of which about 800MB is free after an hour or two of usage. These specifications are pretty much best in class and are mimicked across the board on most decent budget Android devices. Benchmarks aren’t going to impress you but what matters here is real life usage. The device performs well enough with smooth scrolling through the interface though we occasionally encountered intermittent lags. The extra RAM onboard compared to the competition gives the Yuphoria an edge when it comes to multitasking performance. Unfortunately we did encounter heating issues with the phone that also caused it to stutter a bit over long-term usage.  Additionally, on occasion the phone would completely lock up and not respond to any action at all. Overall, the performance on offer was far from horrible but there is most definitely a scope for improvement via software updates. 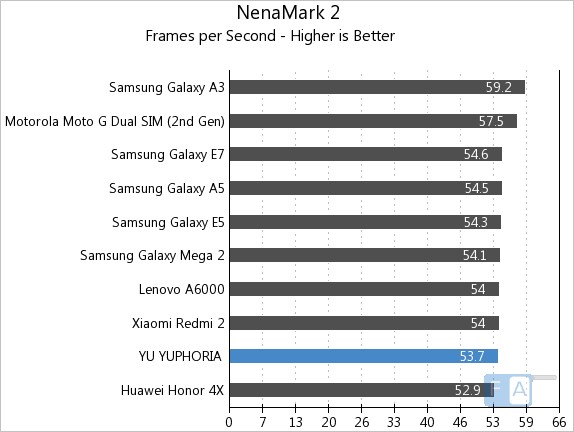 NenaMark 2 gauges the GPU performance of the handset. Here the phone clearly lags behind as the phone scores just 53.7 FPS but within it’s own category, the performance differential isn’t much. 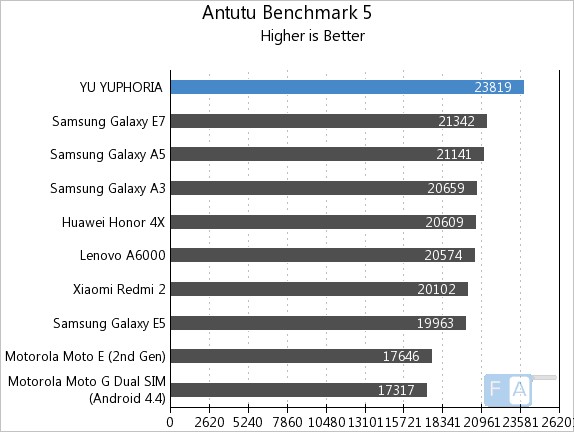 The AnTuTU benchmark is used to gauge overall performance of the handset and the Yu Yuphoria does well here by scoring 23819 points.v

Like a majority of budget handsets, camera performance on the Yu Yuphoria isn’t something to write home about. Inconsistency was the name of the game with the phone overexposing the shots more often than not. Behind the scenes here is an OmniVision OV8865 sensor with f/2.2 aperture. 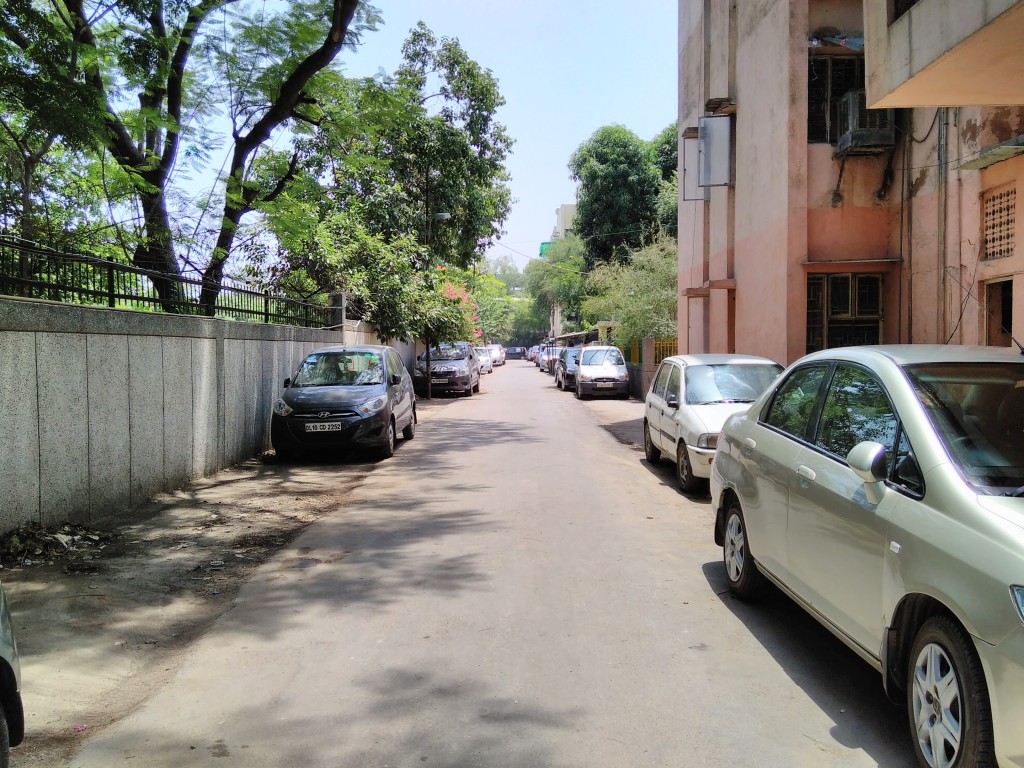 The 8MP unit captures shots that are just about usable in daylight but pale in comparison to the camera on the Xiaomi Redmi 2. Low light shots are out of the question here as the noise levels are raised too high to be useful. The camera also struggles with getting a focus lock when shooting close ups as can be seen in the first image below where it flat out could not focus at all. Also, the shot is massively overexposed. The front facing camera isn’t too bad and let’s you shoot some above average 5MP selfies.

The display on the Yu Yuphoria is an IPS LCD panel with a resolution of 720 x 1280 pixels. A Gorilla Glass 3 layer covers the 5inch panel. While the resolution is certainly adequate for the screen size, we found color rendition to be skewed. 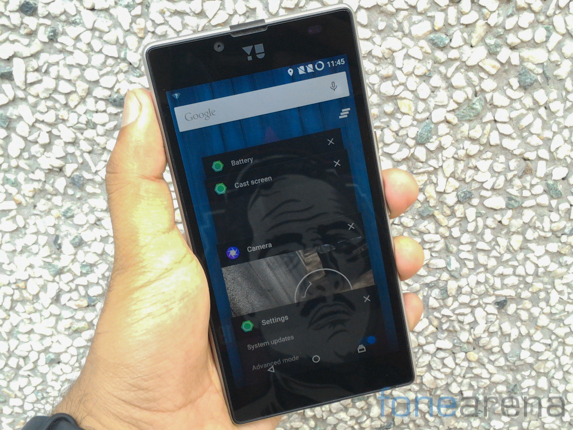 Across multiple units, we spotted a yellow or red cast across the display which points to a problem with color calibration during manufacturing. This can be corrected via a software update and to a certain degree using the built in functionality of Android itself. Yu would however be better served by sorting this out at the earliest. Another problem that we faced on our unit was uneven backlighting which reflects a problem in the hardware itself. That said, this could be a problem with just our unit. Sunlight readability is just about average because of the hyper glossy screen on the handset.

There’s the usual smorgasbord of options when it comes to connectivity. Bluetooth 4.0, WiFi b/g/n, GPS and microSD expansion find their way on to the handset. The phone is a Dual SIM device and supports LTE on SIM 1.  Built in storage is 16GB of which 11.9GB is free at launch. You can expand this via the microSD card slot. Unfortunately, in our tests the phone refused to read any OTG drive making us believe that said feature is absent altogether from the phone.  There’s a Wolfson Audio DAC built into the phone that most definitely has a positive effect on the audio output from the 3.5mm jack. That said, the speakers on the phone weren’t particularly loud and the output was somewhat tinny. 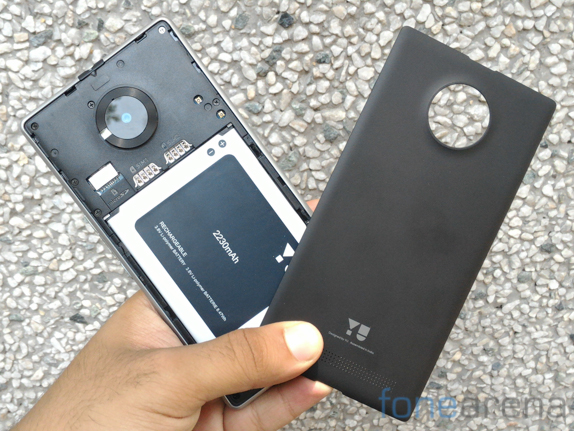 Remove the extremely flimsy cover over at the back and you gain access to the 2230 mAh battery unit. We found that the handset was quite frugal when it comes to battery consumption and we could get by a day of usage very easily. It’s a different story altogether if you are a mobile gamer as that was one usage scenario that rapidly depleted the battery. 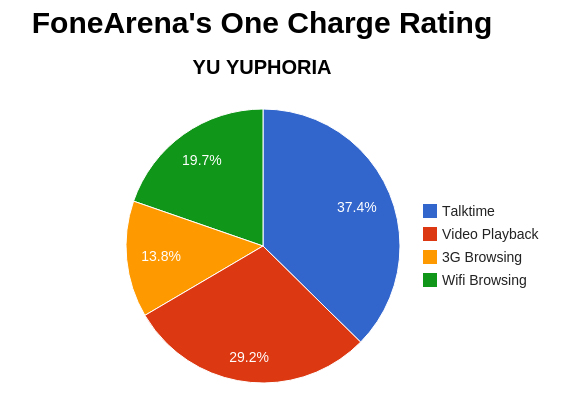 It managed to achieve One Charge Rating of 5 hours and 48 minutes. Check out the battery life test results here.

The Yu Yuphoria isn’t a bad phone. I’d even call it a good phone but it is far from perfect. The handset has its fair share of issues and corners have clearly been cut.  In fact, phones like the Lenovo A6000 Plus and Xiaomi Redmi 2 offer better cameras and build for about the same price. 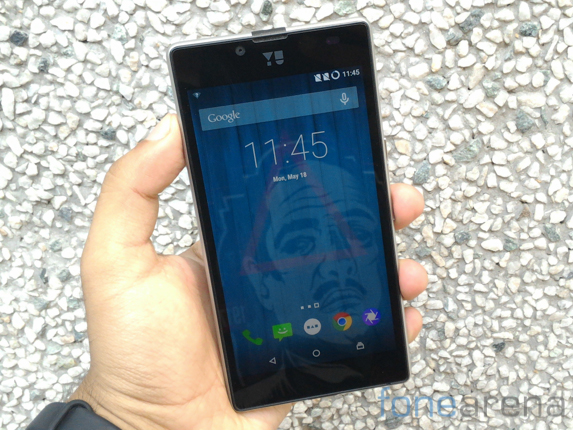 What the Yu Yuphoria offers that nobody else has is Cyanogen as it’s operating system of choice. This practically guarantees fast updates and you can even be on nightly build channels if that’s how you roll. The bloat free software also guarantees smoother performance. All in all, while Yu hasn’t really done a bad job with the hardware , it is the software that makes this phone. On that note, it is up to the consumer to decide between customizability or rock solid construction. The Yu Yuphoria wins when it comes to customizability but it is the Redmi 2 that takes the cake for solid construction. The Yu Yuphoria is priced at Rs. 6,999.