Apple has released iOS 8.3 update to iOS 8 that will be compatible with iPhone 4S, 5, 5C, 5S, 6, and 6 Plus; all iPads except the first-generation model; and the fifth-generation iPod Touch. 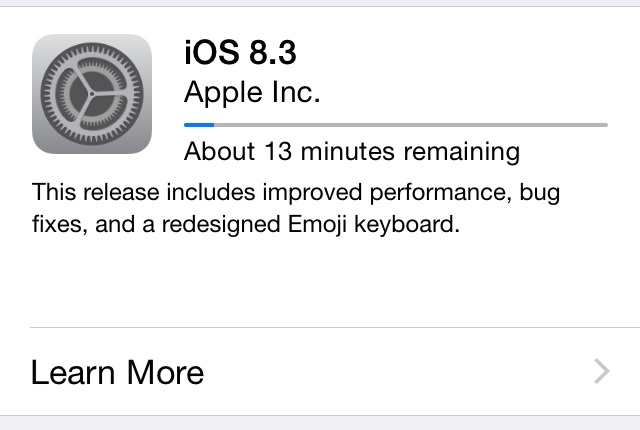 The latest release comes after Apple started rolling out public beta for iOS 8.3 last month. First, up the iOS 8.3 update gets a new emoji keyboard that has 300 new characters that offer some racial diversity where there were limited options before. You can now touch and hold on certain emoji that represent people and you are offered a pop-up that gives you some options to better represent different races. Siri now gets additional support for new languages. Other areas of iOS that users should notice an performance boost in will include Wi-Fi, Safari tabs, third party keyboards, Messages, keyboard shortcuts, the simplified Chinese keyboard and the Control Center. There is the addition of wireless CarPlay.

The update addresses an issue that prevents the screen from rotating back to portrait after rotating to landscape and also fixes an issue where the device orientation appears upside down after pulling the iPhone 6 Plus from your pocket. The iCloud Photo library has also been optimized to work with the new Photos app in Mac OS X 10.10.3.

You can download and install the update by going to Settings > General > Software Update. This update includes several new features and design enhancements.