Apple’s latest operating system iOS 8 is present on 72% of iOS devices, as per latest numbers from App Store distribution. The iOS 8 adoption is up 3% since is was 68% in January . 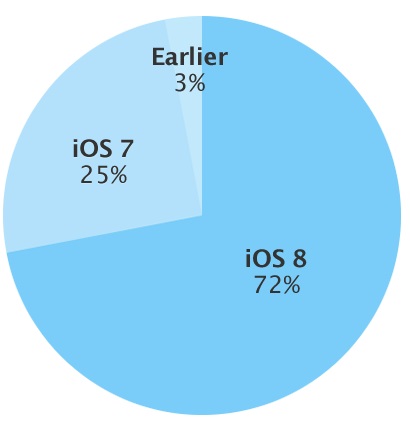 iOS 7 now stands at 25% which is down from 29% in January. While all the older versions are claiming a total of 3% of installs also down from 4% since last month. iOS 8 adoption has been somewhat slower than iOS 7 adoption, as iOS 7 was running on 80 percent of devices in January of 2014, compared to iOS 8’s 68 percent adoption rate at that same time.

Apple had released iOS 8 in September last year and since then has updated the OS with bug fixes an stability improvements. Last week, the company released 8.1.3 update. There were a few bugs when iOS 8 launched so Apple quickly launched iOS 8.1.1 in November and iOS 8.1.2 in December for Touch ID and cellular network issue.

Yesterday, Google released the Android distribution numbers for February 2. It showed that the latest version of Android 5.0 Lollipop released in November, is currently only installed on 1.6 percent of Android devices. A majority of Android users are still running KitKat, which was released in October 2013, or even Jelly Bean, which first debuted in June 2012.