Motorola’s Moto X 2014 is receiving its Android 5.0 Lollipop update as part of a soak test. The new update is rolling out for testers that are part of Motorola’s Feedback Network. 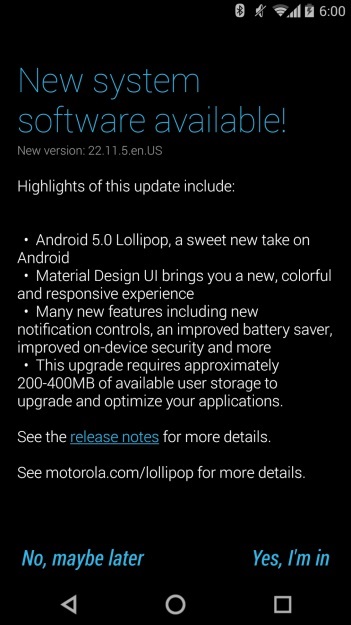 Owners of Moto X Pure Edition, are receiving the update earlier than the Nexus lineup. It must be noted that the update is rolling out  only for select soak test participants and not for all Moto X users. The official release notes of Android 5.0 Update for Moto X were posted earlier by Motorola but soon taken down.

With the help of soak test, Motorola will gather feedback from users in case of bugs and once the software is ready, it will roll out to general public. As expected, the soak test will bring Material Design tweaks and all the major Lollipop updates like lock screen notification, screen pinning etc. to Moto X 2014. In addition, the device also gets Moto Display and Ambient Display, Motorola Assist and Downtime features. The exact date of the Android 5.0 Lollipop release for Moto X is not known yet.
via