Yesterday, the rumored Motorola Shamu aka Nexus 6 showed up in GFX benchmark with specs like 1080p HD display Qualcomm Snapdragon 801 chipset. Today, the phone has again surfaced, this time on AnTuTu benchmarking site. 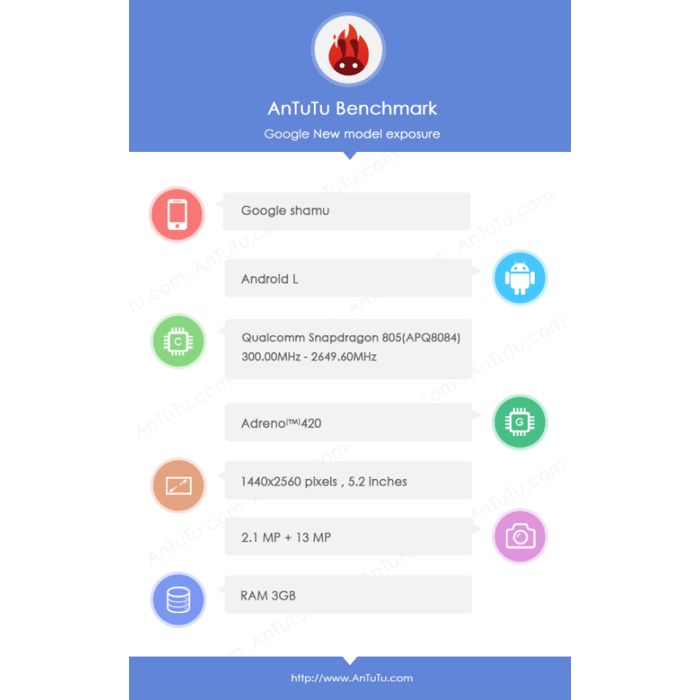 The phone has been listed under the name Google Shamu and will apparently come with a 5.2 inch QHD display with a resolution of 2560 x 1440 pixels. It will be powered by a Qualcomm Snapdragon 805, with a quad-core Krait 450 processor clocked at 2.65 GHz, 3GB of RAM and an Adreno 420 graphics chip. The phone which will run on Android L will have a 13 megapixel camera at the back and a 2.1 MP front shooter and the rear camera is noted to be capable of recording 4K video. Other specifications include NFC, Bluetooth, WiFi and GPS.

It must be noted that benchmarks listings can be different from the original phone and are prone to changes in the specifications. The GFX benchmark yesterday did not reveal much details about the phone but stated that it should come with internal hardware that is similar to the Samsung Galaxy S5, the Sony Xperia Z2, the OnePlus One, and the HTC One M8.

It is not clear as yet on whether this device will be launched as the Google Nexus 6, Google Shamu or Motorola Shamu.