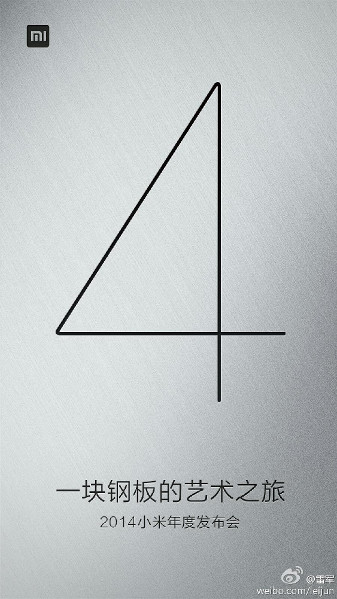 Xiaomi entered the Indian market earlier this week with the Mi3 that would go on sale in the country soon. The Xiaomi Mi3 is still its flagship smartphone that was announced last year. Today, the company’s co-founder and president Lin Bin announced on Weibo that Xiaomi will hold their annual product launch event on July 22nd.

The image shared by the Xiaomi president shows the number 4 in a metal background along with the caption The journey of a piece of steel metal, so it is likely to be the Mi4 with metal build.

Earlier rumors and the live images revealed that Mi4 would come with a metal build. He already announced that Xiaomi would launch smartphones with LTE support, so the Mi4 is likely to come with 4G LTE connectivity.

According to earlier rumors, the Xiaomi Mi4 would come with a 5.2-inch 1080p display, Nvidia Tegra K1 or Snapdragon 801 / 805 SoC, 3GB RAM and a 13-megapixel rear camera. We should know more details about the smartphone at the launch on July 22nd.