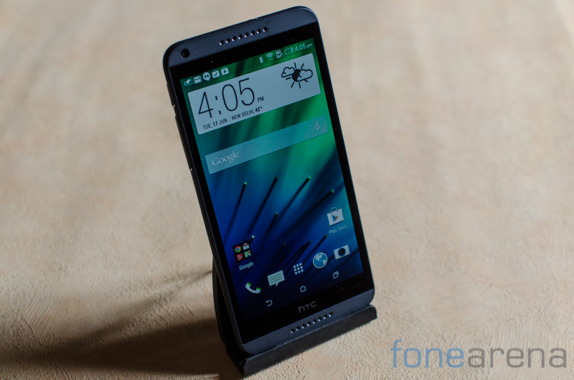 There’s no doubting the fact that phablets have gained consumer approval and are now considered a mainstream category of devices. HTC has so far kept its distance from these large screen devices with the One Max being its largest smartphone till date. With the Desire 816, HTC is bringing it’s A-Game to the mid range. As the upper end of smartphones hits a plateau, it is the mid range that is proving to be rather interesting. In our review we take a look at the HTC Desire 816 in a bid to determine if the handset really does fulfill all our desires.

The Desire 816 takes liberal cues from the HTC One for its design language but manages to develop its own identity. The front of the phone comprises of a very interesting matte finish material. The screen is surrounded by a black bezel which is once again in line with the design language of the One series of phones. 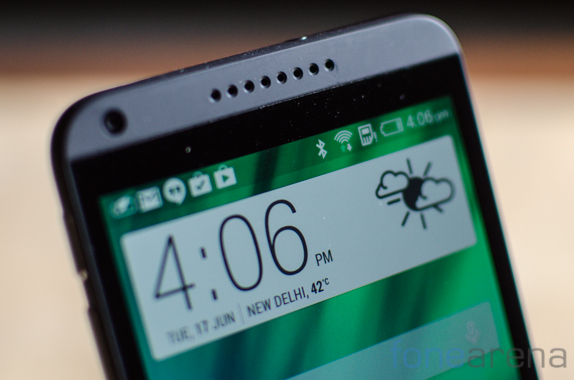 Above the display to the right lies the 5MP front facing camera. This is HTC’s push into capitalizing on the selfie rage that has taken the market by storm. Above and below the screen lie the front facing stereo speakers which are placed within elegantly cut holes with chamfered edges that shine light on the quality of craftmanship. 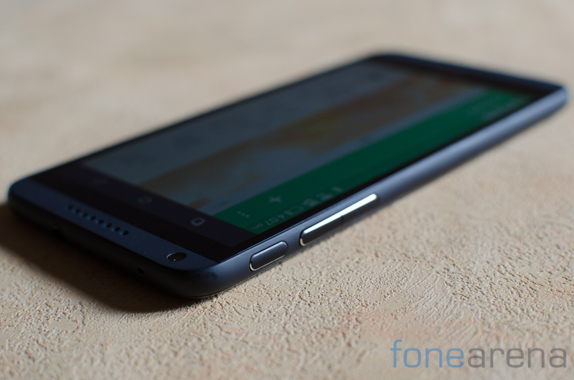 The left side of the phone is where you can spot the power button and the volume rocker. While the position of the power key is a welcome change from the usual top placement on HTC devices, it is still far too cumbersome to reach given the size of the handset. The two buttons are made of metal but have a matte black paint coating on top. The volume rocker feels flimsy to touch and is not particularly reassuring to hold. 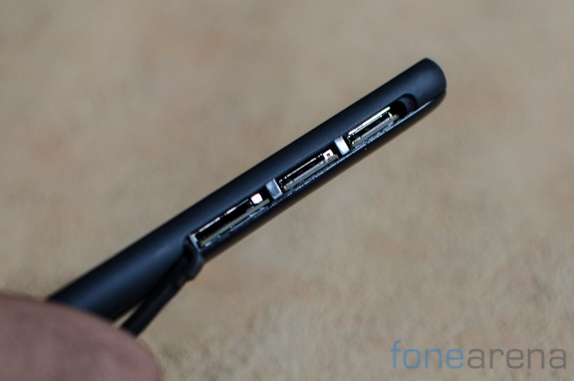 The right side of the HTC Desire 816 is where all the ports lie. Hidden under a single slot are the two SIM card slots and the microSD expansion slot. The cover feels a bit flimsy but we doubt you’ll be accessing this often enough for it to be an issue. The microUSB slot of the phone lies at the bottom while the 3.5mm audio jack is at the top. 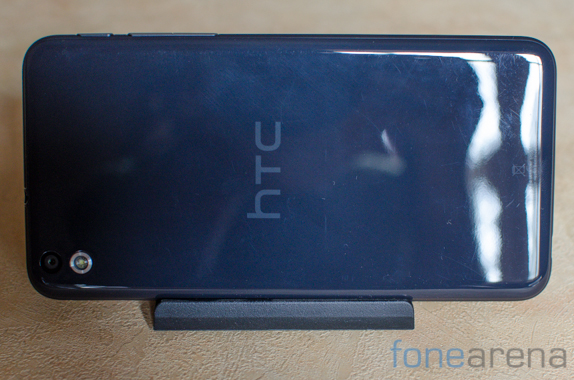 The back of the phone is where serious lapses in build quality start to show up on the HTC Desire 816. Sure the plastics used up front look alright, the back however is made of a hyper glossy material. This material not only attracts fingerprints but is also highly prone to scratches. Even with careful usage, the back had accumulated its fare share of scratches which doesn’t bode well for long term use. Over all the handset is an intriguing mix when it comes to build quality. The phone is quite light at 165 grams but the quality of plastics is a let down. The phone measures 156.6 x 78.7 x 8mm.

Running Android 4.4.2 KitKat with Sense UI 6.0 on board, there isn’t anything inherently different in the interface compared to other modern HTC devices. In fact the interface is almost identical to the one on the HTC One M8. 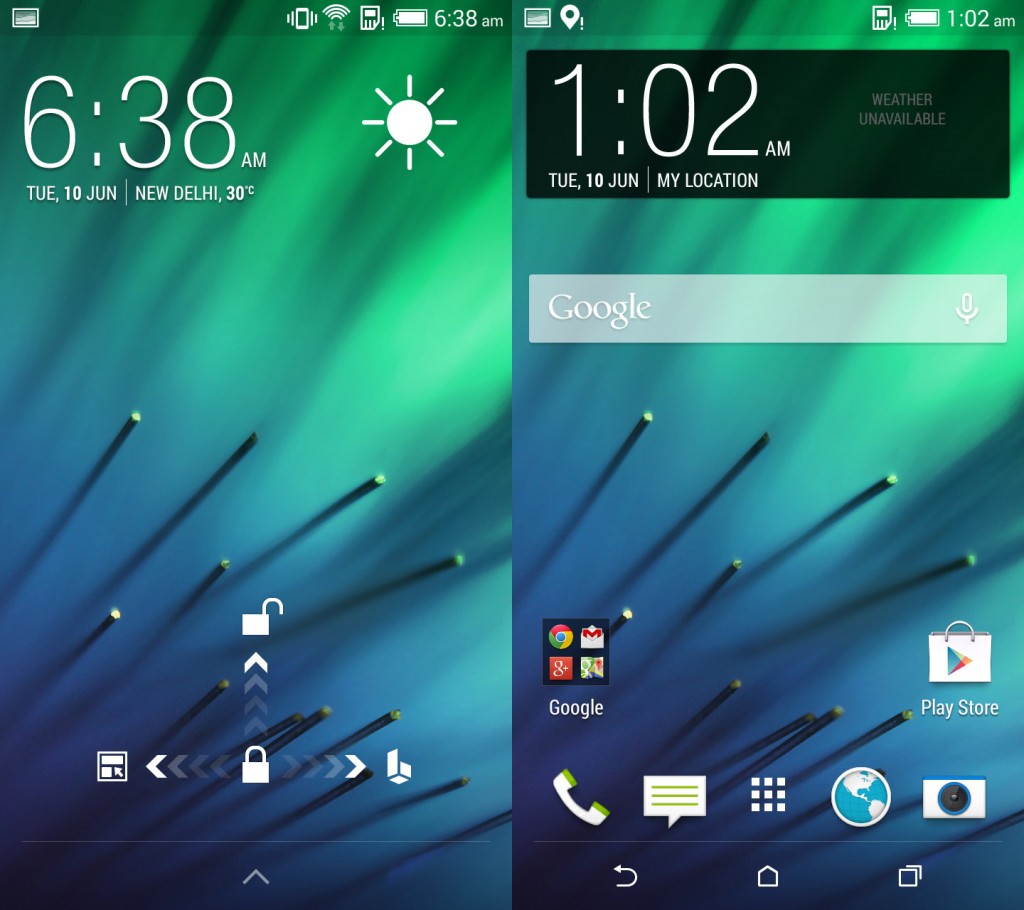 The lockscreen is a typical Sense UI affair with basic graphical weather information and a clock. You can customize the lock screen to display widgets as well though they are disabled by default. The unlock button can be swiped up to perform three different actions. Swiping up unlocks the display, to the right is the shortcut for BlinkFeed while on the left lies the shortcut or the Homescreen. 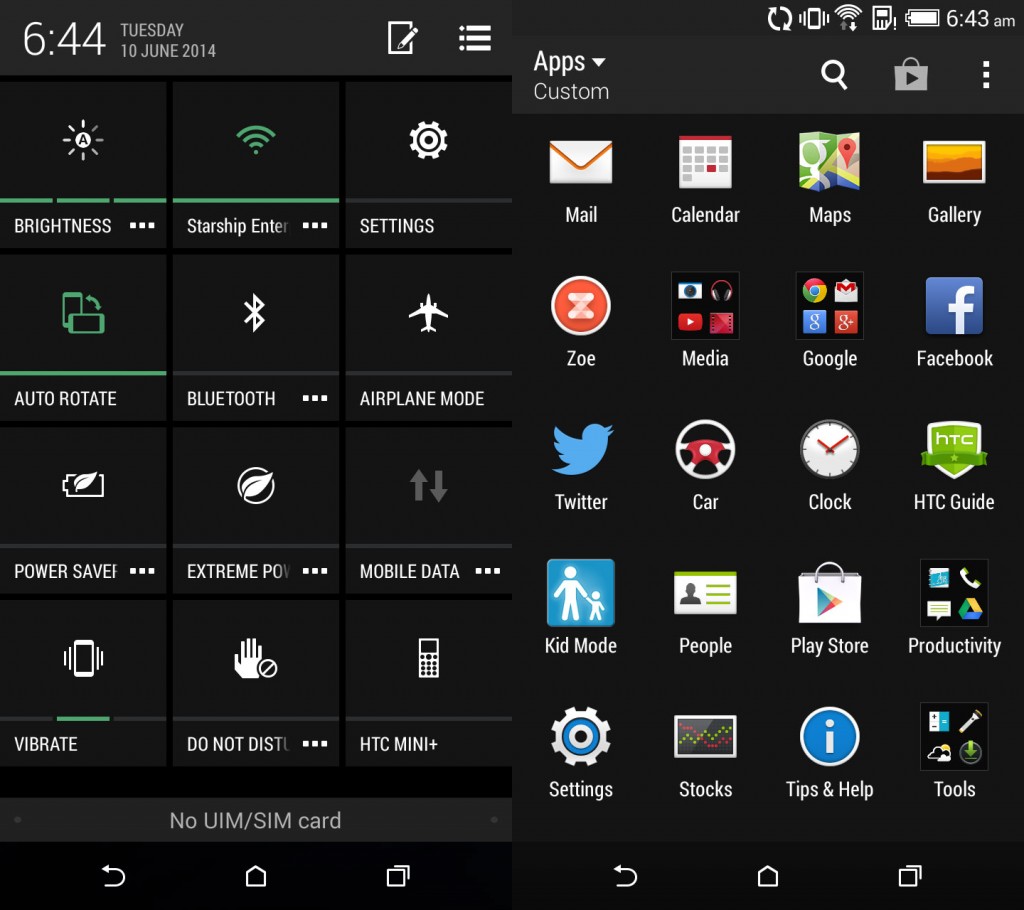 Coming to the main interface of the device, the left most screen is used for BlinkFeed and you can customize the content to be displayed here. The other homescreens behave as you’d expect. You can place icons and widgets here and also set a specific panel as the default. The notification hub and quick toggles have a black and green color scheme that looks quite appealing. The app drawer on the other can be arranged in alphabetical order or in a custom arrangement as you please. In essence, Sense UI provides as much flexibility as you can expect from a manufacturer provided ROM and doesn’t leave much if anything to complain about. 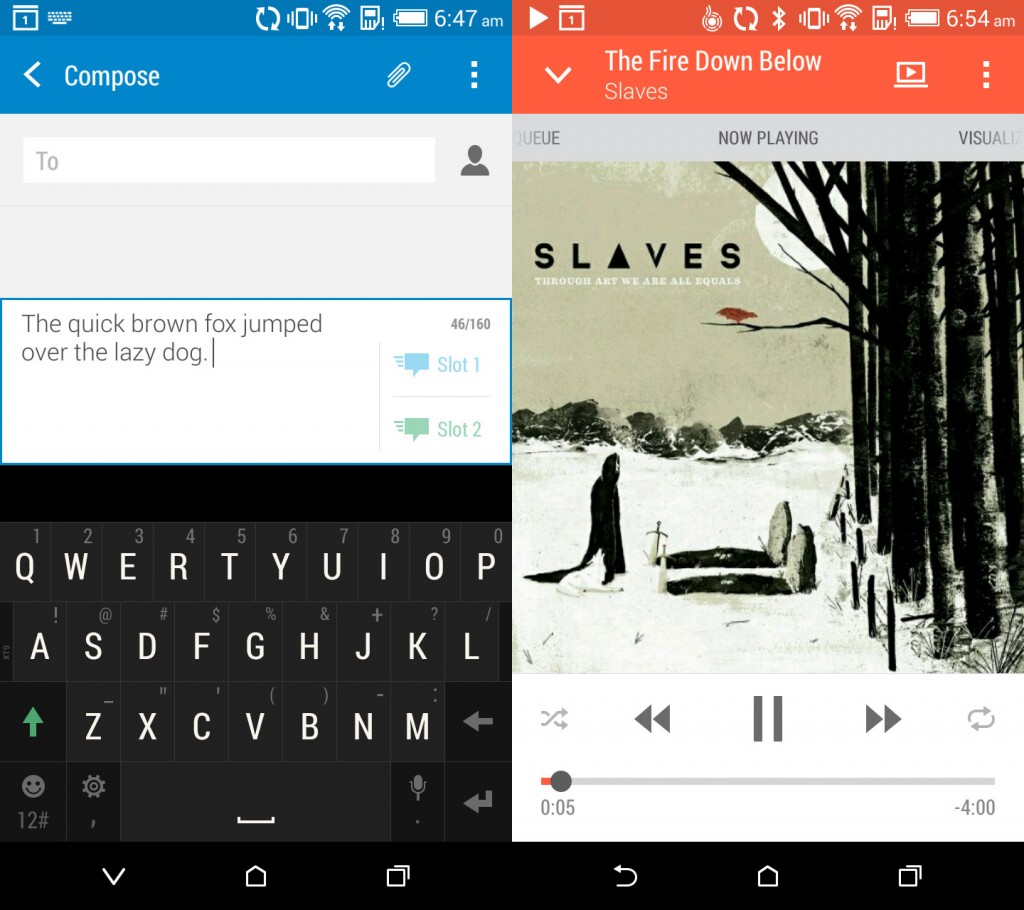 Built in applications are in line with those seen on the M8. System applications have got a slight interface overhaul over the previous generation and have adopted a flat and somewhat colorful look. This is visible in the messaging application and the music player that have a blue and orange band on top respectively. We believe that Sense UI is amongst the most beautiful manufacturer provided interface layers and at least a generation ahead of the likes of TouchWiz which looks antiquated to say the least.

Being powered by the tried and test Snapdragon 400 chipset, we had a fair idea of what to expect in terms of performance from the handset. For the uninitiated, the Snapdragon 400 MSM8928 chip has four Cortex A7 cores. These are closed at 1.6Ghz and paired with them is an Adreno 305 GPU. The phone also has 1.5GB of RAM on board. HTC has been doing a great job with software optimization and Sense UI on the 816 follows that tradition. In day to day use, it is next to impossible to spot lag. In fact from a usability perspective, there’s little that could have been improved. Average usage does not bog down the handset and browsing, multitasking works as expected. 3D games do tend to stress the handset but not enough to cause performance related issues. We put the phone through our usual test bench to see how it performs in synthetic benchmarks. At the end of the day real world usability is paramount but benchmarks help us get comparative scores with competing handsets. That said, it is worth keeping in mind that our testing revealed optimizations done by HTC to boost benchmark performance. You’ll probably want to take the scores with a pinch of salt. 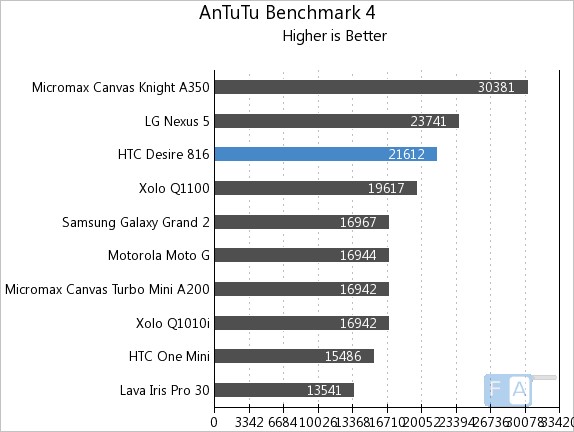 In the all encompassing AnTuTu 4 Benchmark, the phone performs quite well. While expectedly behind the likes of the Nexus 5, the phone managed to outperform most of its affordable phablet competitors. 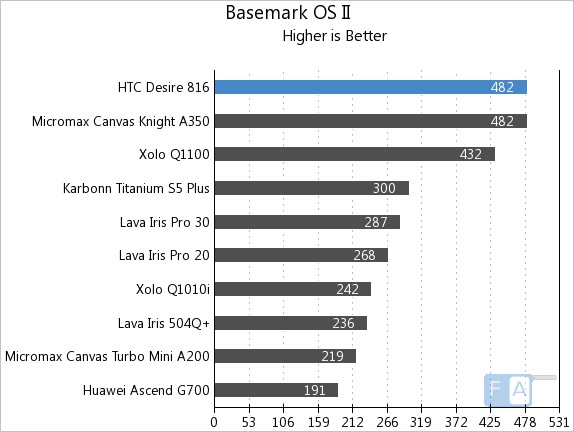 In the Basemark OS II benchmark, the phone ranked above most of its phablet competition and scored 482 points. 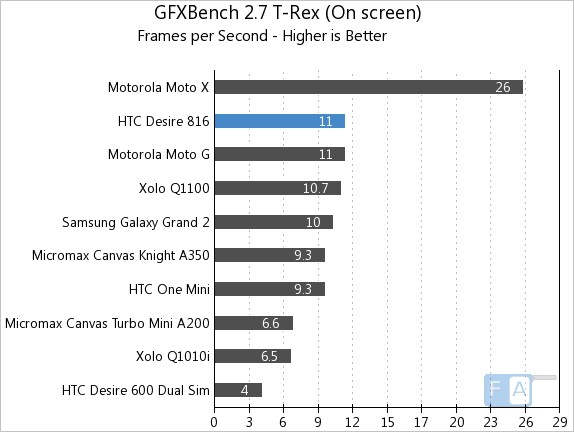 With an Adreno 305 GPU under the hood, the HTC Desire 816 isn’t exactly a powerhouse. The phone manages 11FPS in GFXBench 2.7 which isn’t particularly impressive. Overall, benchmark performance isn’t going to break any records but you probably shouldn’t worry about that as day to day usability is as good as it gets.

The screen of the phone is a 5.5 inch 720p panel. This results in a pixel density of 267ppi. Held close, it is entirely possible to see jagged edges. At standard viewing distances though the display is serviceable. 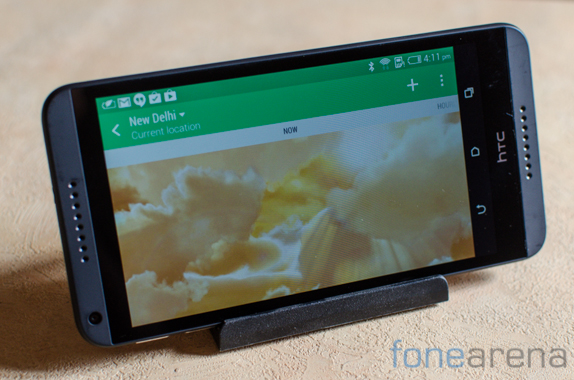 Being an IPS panel, it displays good viewing angles and the contrast levels are above average. The phone lacks Gorilla Glass protection so you’ll want to be extra careful with the screen. Our biggest concern with the screen was its brightness levels. We usually preferred to keep the phone set at the highest brightness level which isn’t bright enough when dealing with the summer sun in India. Add to that the reflective front of the phone and it becomes harder still to view the device in bright sunlight.

The HTC Desire 816 is equipped with a 13MP camera at the back. The company has opted for a high resolution BSI sensor paired with a 28mm lens. The lens has an f/2.2 aperture which shouldn’t be too bad for taking low light shots. The volume rocker can be set as the shutter key or the zoom rocker. 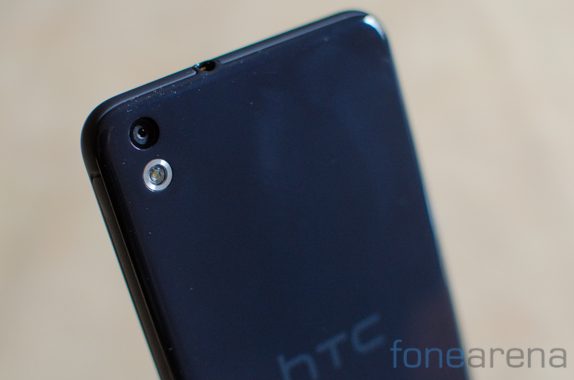 The phone also has a 5MP front facing camera with a BSI sensor. Switching between the two cameras is a breeze thanks to the dedicated selfie mode that has been built into the software interface. It also brings with it some additional features like ‘makeup’ that tries to improve the photograph through pre-programmed algorithms and smile shutter that takes a photo only when you’re smiling. 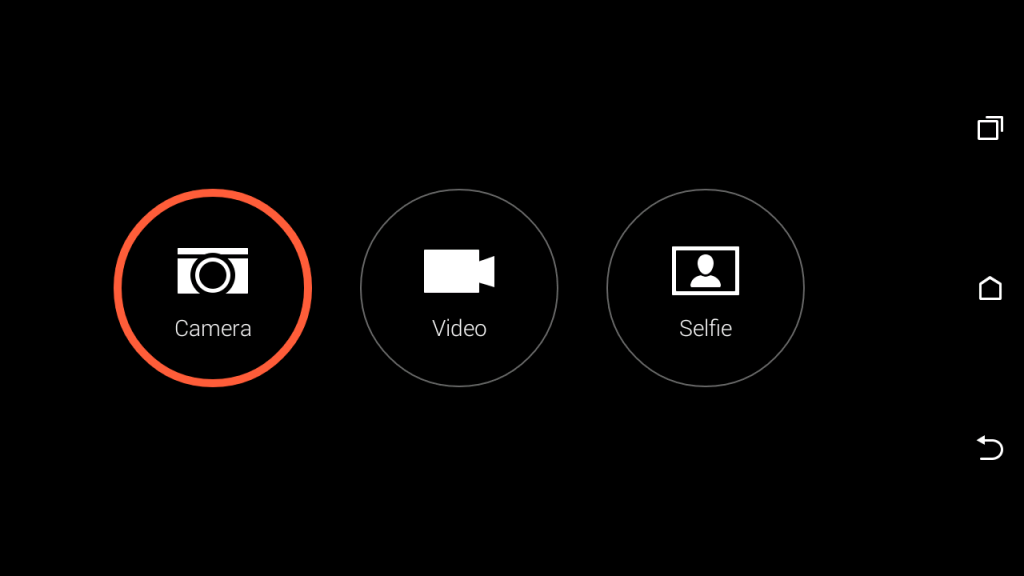 As with the rest of the software, HTC has done a phenomenal job with the camera application as well. Extremely simple at first glance, it makes it exceptionally easy to make changes to extended settings. It is also possible to set the Auto Exposure and Auto Focus lock by long pressing on the screen. 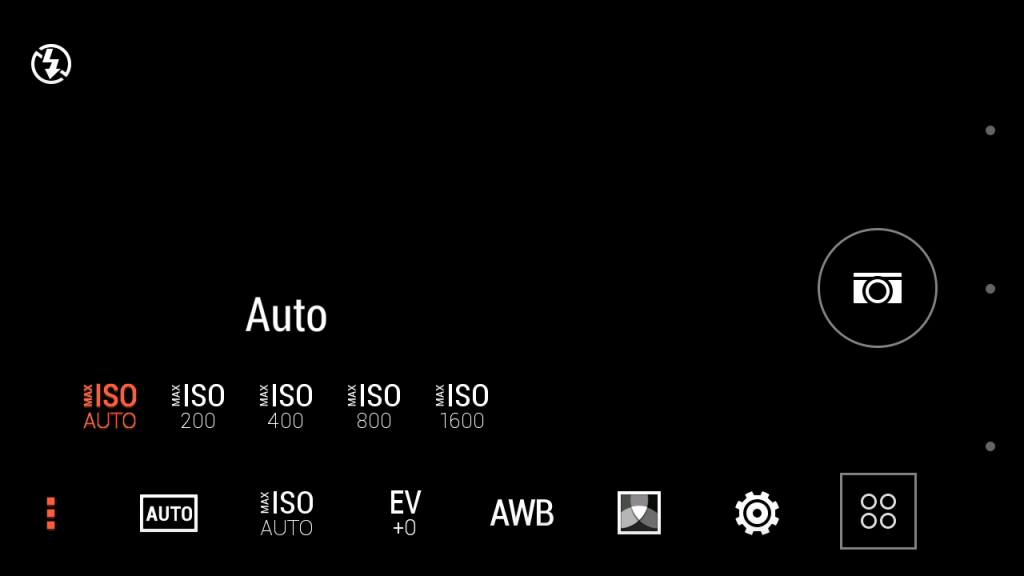 Image quality on the HTC Desire 816 is generally very good. The phone shoots pleasing images with low noise levels and accurate color rendition. We were very happy to see the phone select correct white balance levels even in challenging situations with fog, mist. 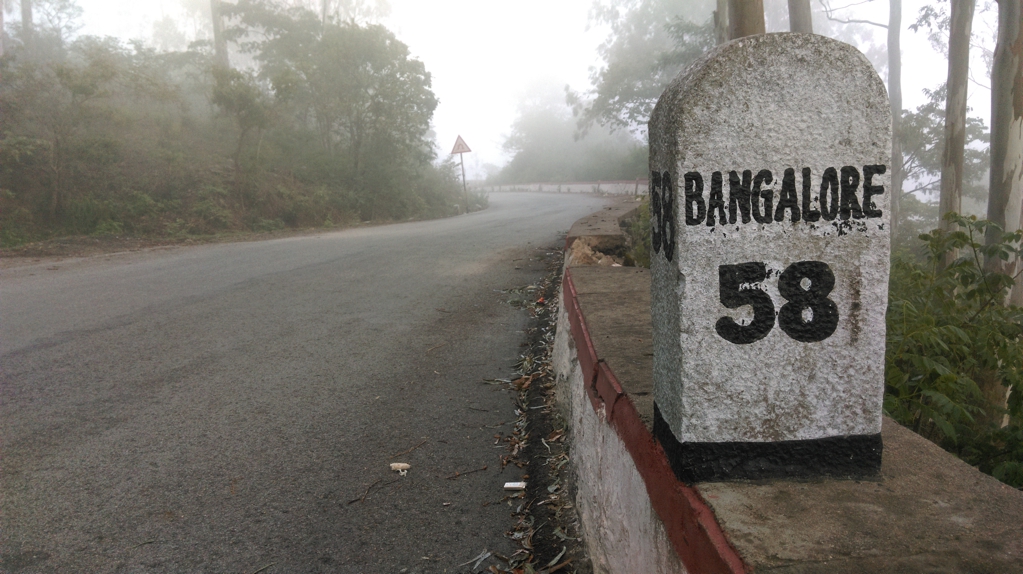 Night time shots are not the 816’s forte and the phone could have benefited from OIS even in a couple of well lit indoor shots but it is understandable to see it missing given the market positioning of the handset. Colors are slightly oversaturated but most users seem to prefer warmer tones anyway so this shouldn’t be a problem.

The phone shoots upto 1080p video at 30FPS and 720p video at 30FPS. Video quality is good but not as great as the still image quality. Bitrates reach 20Mbps and audio is recorded in stereo.

The HTC Desire 816 comes very well specced in terms of connectivity options. Our India specific unit was a dual SIM version though single SIM versions of the phone do exist. The phone accepts two nano SIM cards through the port on the right hand side. The standard connectivity options include 3G, WiFi  a/b/g/n, Bluetooth 4.0 with aptX and GPS with a-GPS. You also get DLNA support as you’d expect. Built in memory on the phone is a paltry 8GB of which 5.6GB is available. You’ll definitely be needing that memory card slot for expansion. 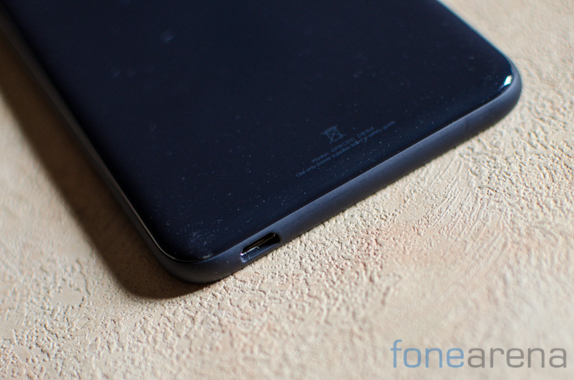 The built in non removable Lithium Polymer battery on the Desire 816 is rated for 2,600 mAh. In our standard testing we got about 9 hours of browsing and 9.5 hours of video playback. Your mileage will vary depending on the network and screen brightness conditions but it is definitely possible to get through a day with the phone. 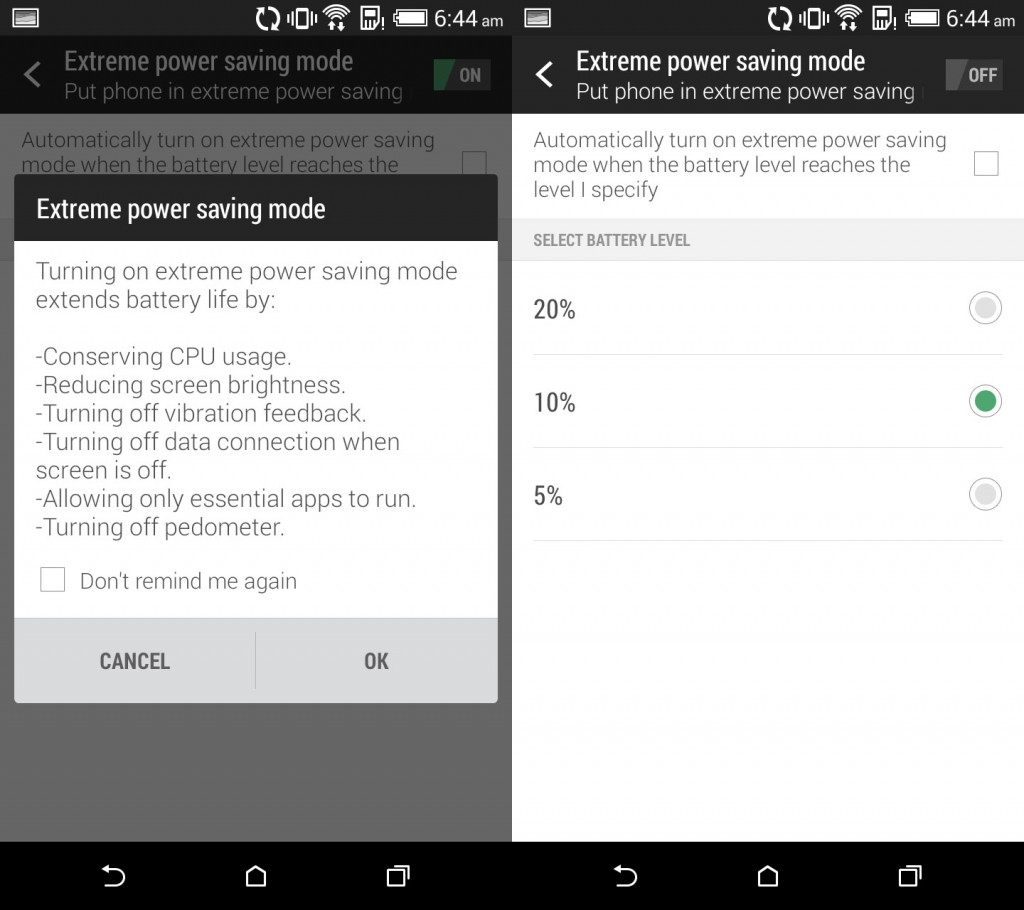 Additionally, you get two power saving modes. The first one throttles the CPU and dims the display, Extreme Power Saving on the other hand drops you into a simplified launcher that makes only the essentials available. 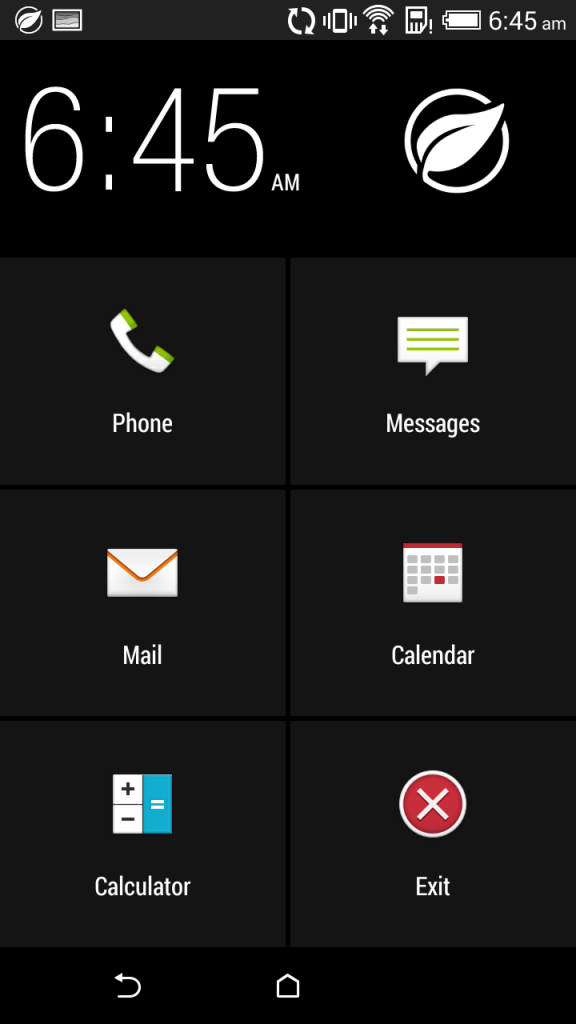 HTC’s Extreme Power Saving Mode is an interesting implementation and not quite unlike the one found on the Galaxy S5. Working both on a software and hardware front, it drastically drops down processor usage which is a significant contributor to battery consumption. In fact, the phone essentially drops down to a feature phone mode wherein all you can do is to make and receive phone calls, text messages and a few more basic functions. Data connectivity, multi tasking and many more functions are blocked out.

The HTC Desire 816 is a beautiful phone that is let down a bit by the use of shoddy plastics at the back of the phone. Other than that small niggle and perhaps the not so high resolution screen, it is hard to fault this mid range phablet. 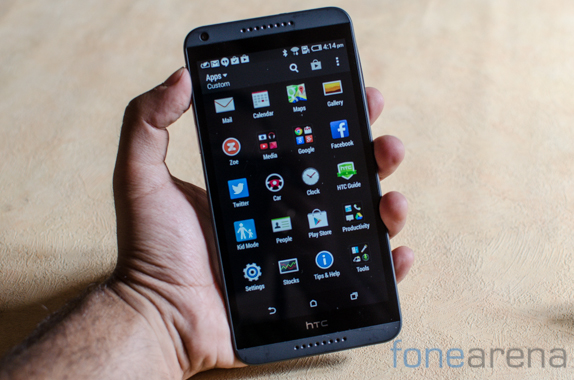 The specifications of the phone are good enough  for all but the most demanding of users. The screen is gorgeous and battery life is stellar. The camera on the Desire 816 in fact proves to be better in most scenarios than HTC’s flagship Desire 816. So should you buy the HTC Desire 816? We’d give it a resounding recommendation as the phone provides a very potent mix of performance, design and value at a fantastic price point.