Toshiba has taken wraps off its latest microSD memory cards which the it claims are the fastest in the world. The new cards comply with the UHS-II interface standard, the ultra high speed serial bus interface defined in the SD Memory Card Standard Ver. 4.2. 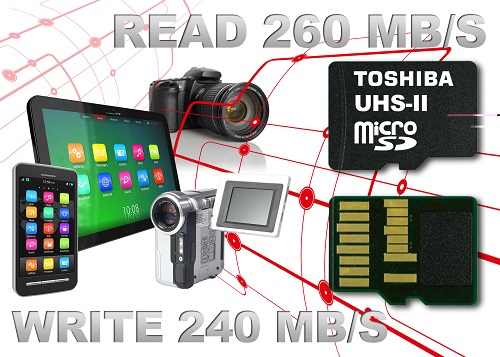 According to the company this is an upgrade if compared to Toshiba’s current 32GB microSD UHS-I cards with 8 times write speed improvement and 2.7 times read speed improvement. On the other hand the 64 GB card can sustain 240 MB/s when writing and 260 MB/s when reading.

These faster transfer speeds reduce the time required to download large data movie and music files to smart phones and tablets, and enable camera users to shoot high resolution digital still images in a continuous high speed shooting mode. The memory cards can be also useful for 4K2K video recording and live broadcasting. Toshiba has not revealed the prices for both the memory cards yet.