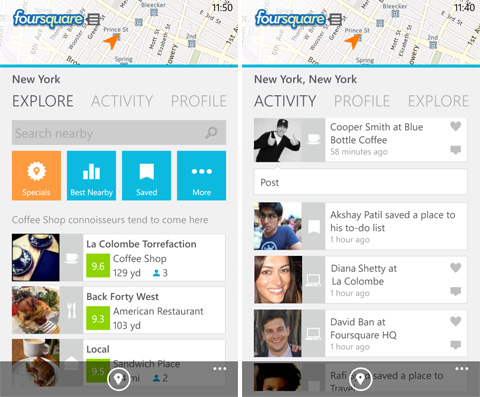 Foursquare, the popular location-based social network, has just received a 15 million dollar investment from Microsoft. This equity investment from the Redmond company comes after a successful $35mn round of VC funding for the New York based Startup in December last year, reports the Wall Street Journal. Along with this fresh investment, Microsoft has also entered into a multi-year deal with Foursquare for licensing its vast location-based data. This will apparently be put to use in its Search Engine Bing, and naturally in Windows Phone too, as an extension. Foursquare has a massive point of interest database that’s heavily crowd sourced with tips, check ins, comments and so forth, hence we think this deal is a biggie for Microsoft.

Foursquare’s CEO Dennis Crowley wouldn’t reveal how much Microsoft is paying for this contract, but he does note that Microsoft is now the biggest source of revenue for the company. The app has 45 million users and increasing, with data of about 60 million restaurants and countless POI places. With this treasure trove of data, the Bing machine learning algorithms get to crunch more so that contextual search can benefit from this. In Microsoft’s long pending announcement of its voice assistant, this deal might play a significant role, as no other company has touched Foursquare data through search yet. Will this change things around at least a little bit for Microsoft? Even if this doesn’t, the newly announced CEO sure has, already.