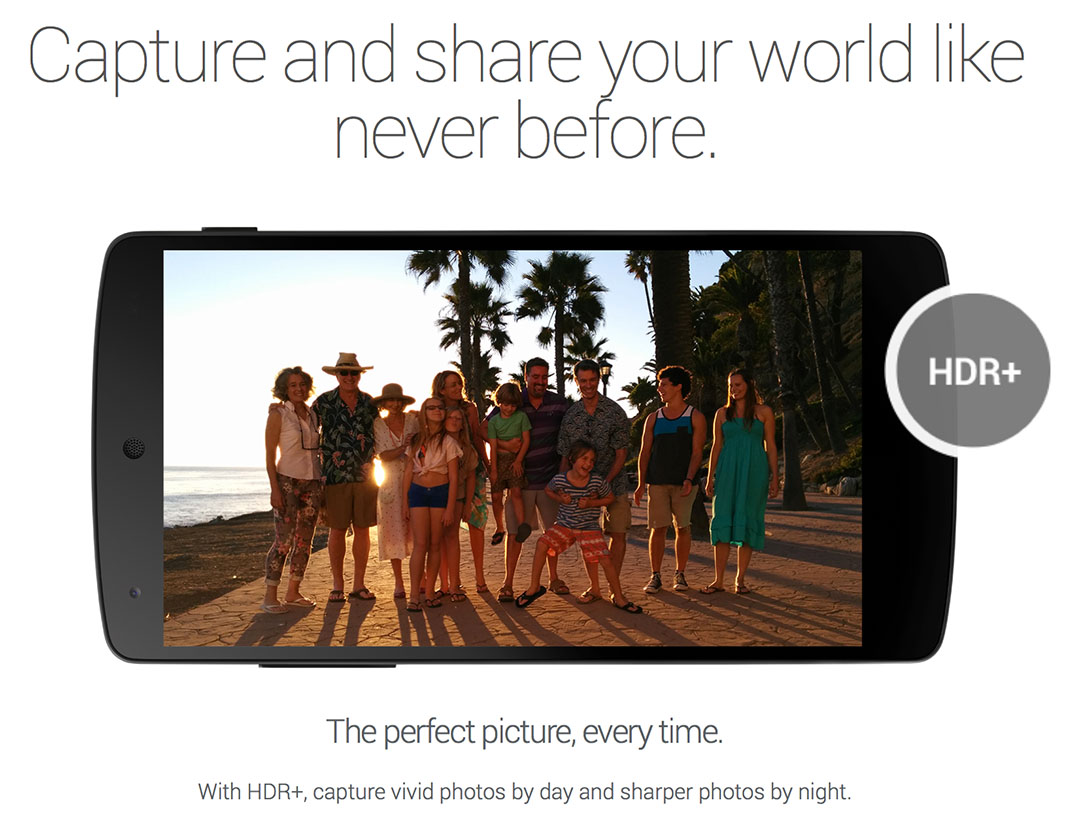 Demystifying the Google Nexus 5’s HDR+ mode, what does it actually do?

The Google Nexus 5‘s 8 megapixel camera has been a hot topic of discussion ever since it made its way into the market. With people getting their hands on it the day after it released, various reports came in. Some said the camera was average, some said the camera was great, and some said one must always use the in-built HDR mode for the best pictures. It definitely got us intrigued, especially with Google promoting the HDR+ mode one its Nexus 5 product page as “With HDR+, create vivid photos by day and sharper photos by night.” Technically, HDR directly means “Higher dynamic range” which will fuse multiple exposures and output a single photo that is equally exposed, but that doesn’t seem right in line with Google’s description, does it? Well, we set to find out exactly what it does, and the results are quite interesting, to say the least.

When we started using the camera, we immediately found the Nexus 5 to take slightly sharper and better photos using the HDR+ mode, but there is a lot more to it than what we could notice. Lets take an example and find out the differences between two photos, one taken with HDR+ and the other, without.

First, the HDR+ photo of a low light scene – 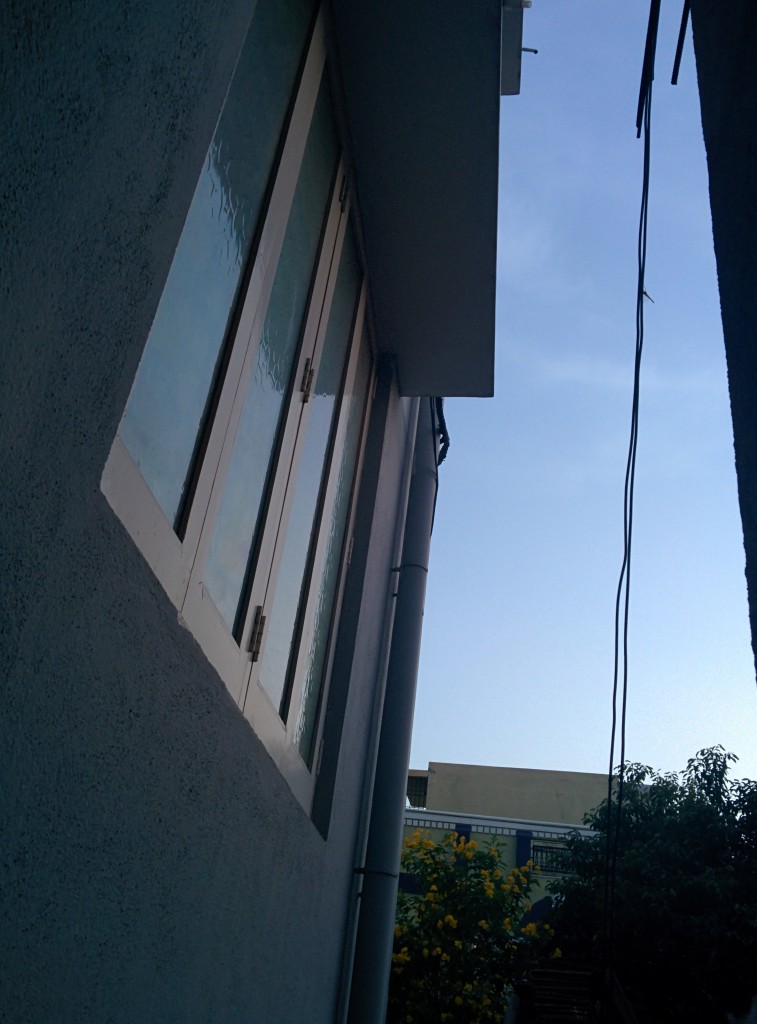 Taken in the evening, this photo is challenging for most phones, but the Nexus 5 seems to have pulled this off well. Here is the important EXIF data that matters –

Now, for the photo taken in the normal mode, without HDR+ 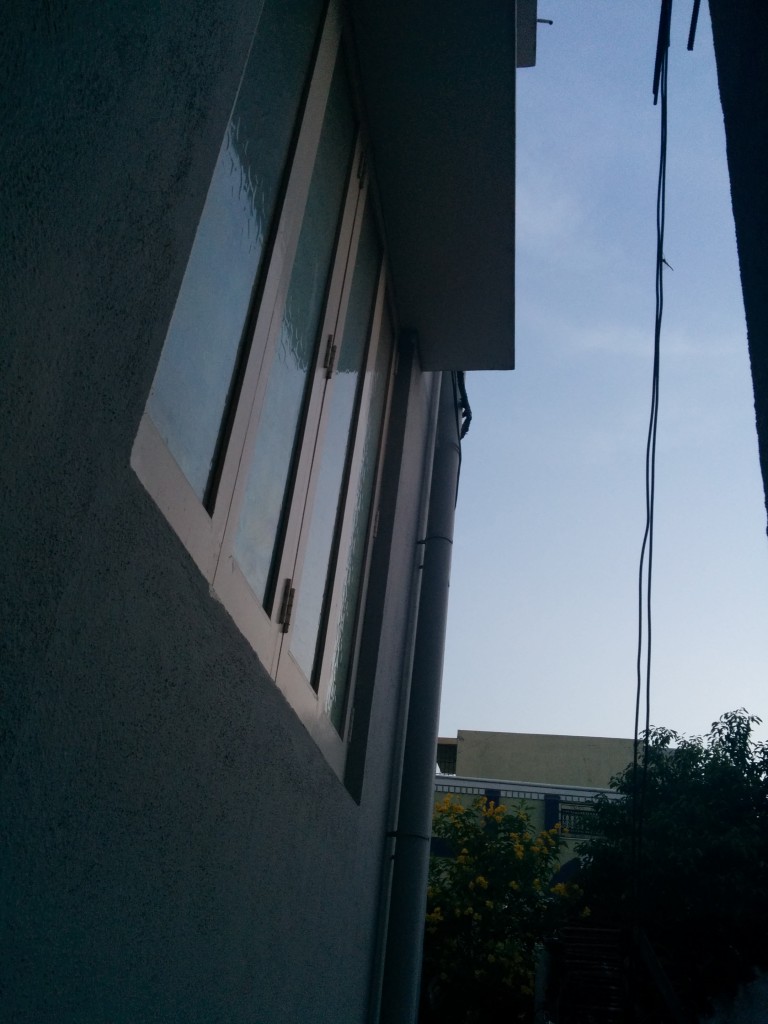 The EXIF data for this photo is different from the HDR+ photo! The data reads as –

It’s surprising that there is not only a change in resolution between the two photos, but the Aperture value as well. Here are the differences –

We can safely say that there is no variable aperture apparatus on the Nexus 5, owing to the size of the module, so the discrepancy in the values seem suspicious. We also noted that every other value, including the resolution has changed with the HDR+ mode. What could be the reason, if “HDR+” is seemingly just a fusion of differently exposed photos. Not likely, eh? Lets take a closer look at these samples now. 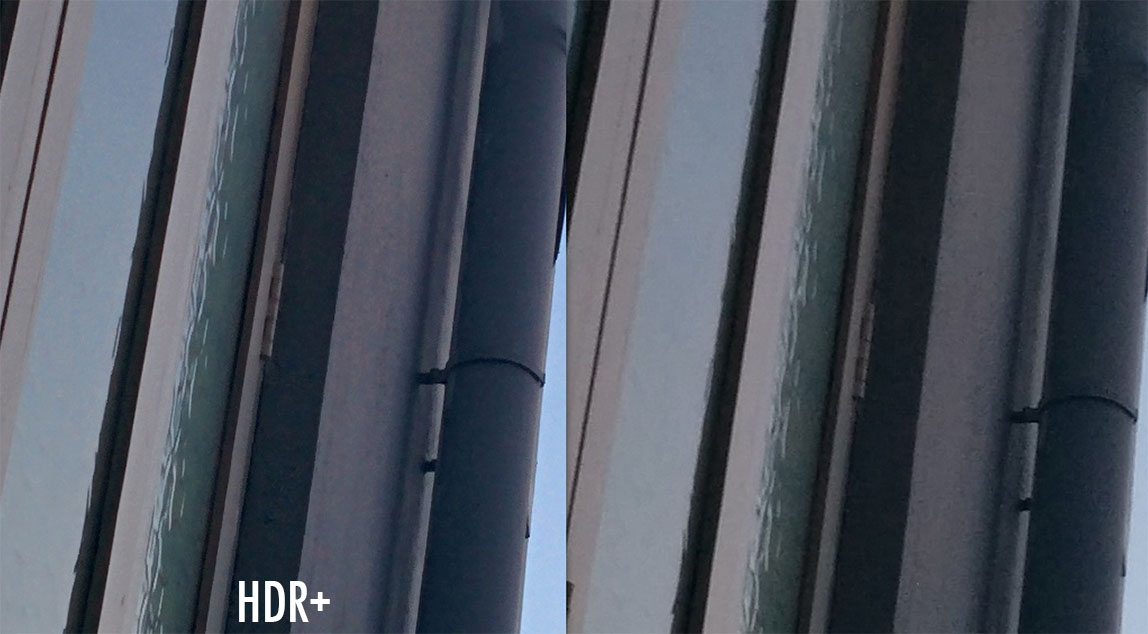 You can click to open the photo above in full resolution, but it is evident even from this resized image that the HDR+ photo is way better. It has truer colours, better noise reduction and sharper details. Even at ISO 171, the normal photo has more noise than the HDR+ one, which, at ISO 555 exhibits excellent rendition of the scene. Also, note that there are no tangible “Dynamic range” advantages in this photo. The HDR+ photo is obviously brighter and has a balanced exposure, but does it have a higher dynamic range? Nope, not at all.

It is also interesting to note that these photos have different ways of approaching the scene itself. The normal mode has a slower shutter, lower ISO while the HDR+ photo, which is well processed, has higher ISO and faster shutter. It’s almost as if the camera algorithms change when you go into the HDR+ mode, which is supported by the fact that the interface sort of reboots when you switch between the modes. It suggests that the HDR+ mode is actually a totally different camera algorithm rather than the normal one that comes packaged with the stock camera app.

We had taken another set of photos to see how the HDR+ mode improves the scene, here are the full resolution samples –

We find similar EXIF differences in this photo too, but the rendition of details is where we saw major differences. See – 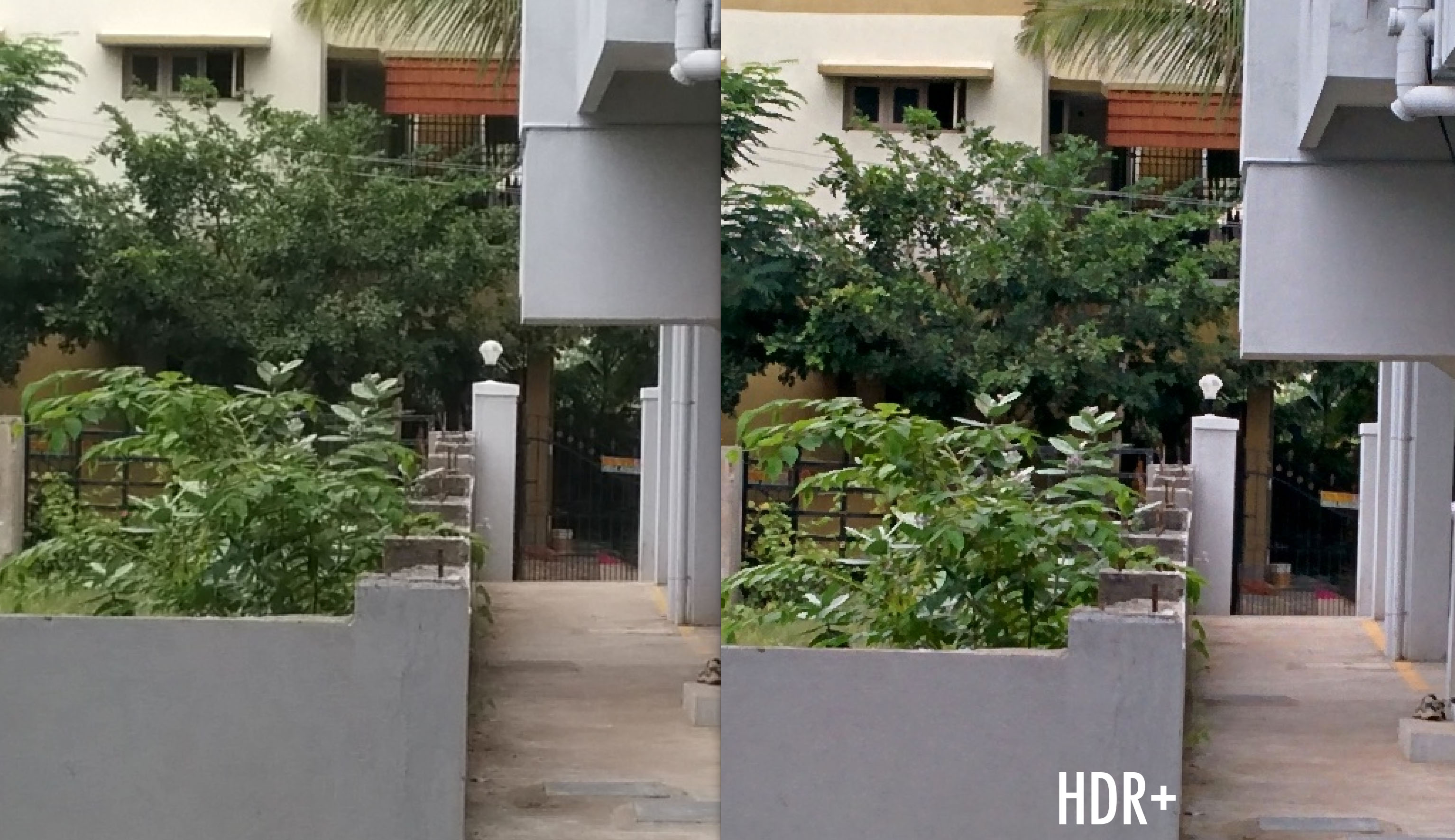 Do check out the full resolution version of this image above.

Colours – Punchier and more accurate on the HDR+ photo.

Brightness and exposure balance – HDR+ image exposes better with details of foreground as well as background.

Overall, the HDR+ image is arguably better but we definitely notice the punchier colours and a good amount of post processing going on in there. The HDR+ mode also tends to produce jagged edges for straight lines when zoomed in, and has better dynamic range, although far from the usual “HDR” photo. Don’t believe us? Here is a comparison of Nexus 5’s HDR+ vs the normal HDR mode, taken with the HTC One. 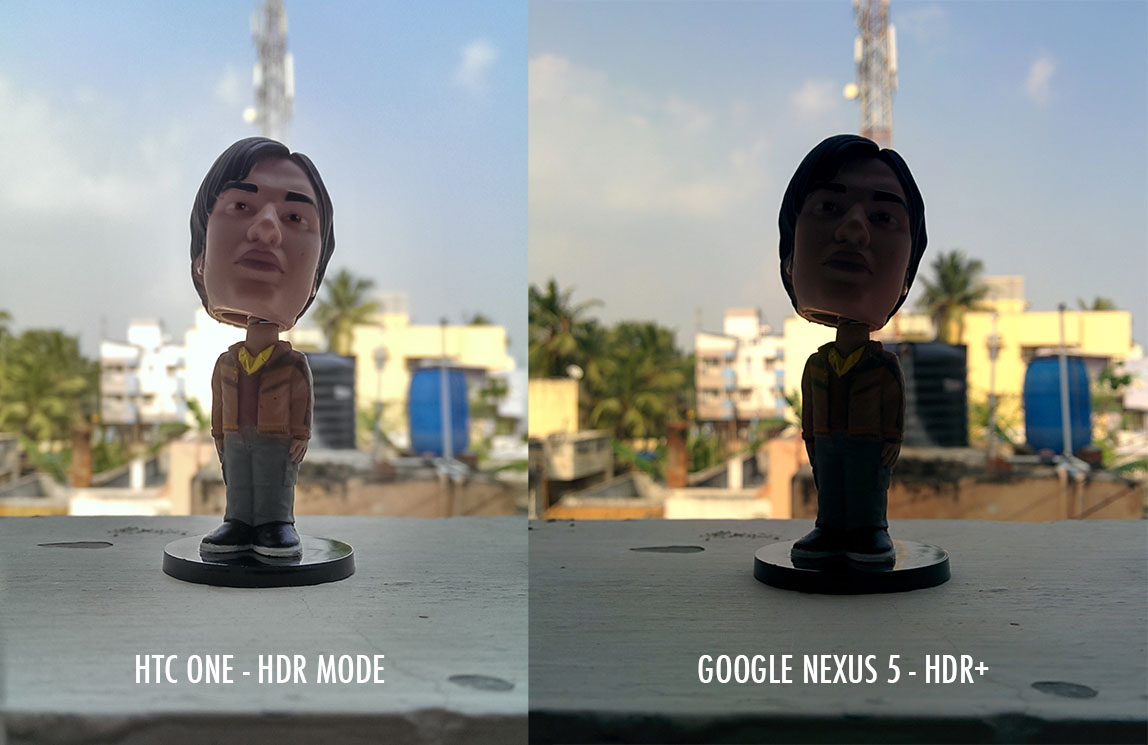 Before you call us names, we did focus both the cameras on the same point – the face of the Raj bobble head. So, calling it “HDR+” seems like a mistake, Google should have given it a different name because, honestly, there is no dynamic range here, that the HTC One so naturally achieves.

So, the inference here is that the Google Nexus 5’s HDR+ mode might not actually be related to the actual HDR, but is definitely the only mode in which the Nexus 5 takes great photos. The saturation, contrast and even the dynamic range, to an extent is very much improved over the normal mode, and like Google says, take vivid photos in daylight and sharper photos in low light(as well as daylight) with the HDR+ mode, because that’s the mode the Nexus 5 should be in, by default. On the technical side, it sure seems like HDR+ has a totally different approach to a scene, which suggests different algorithms for scene recognition. So, is this another attempt from Google to add features on top of the stock camera, that will not be available on AOSP, or is it simply a hardware dependent feature that the camera software had to take advantage of?(Clearly, the Nexus 4 lacks this) Let us know what you think, in the comments section below.