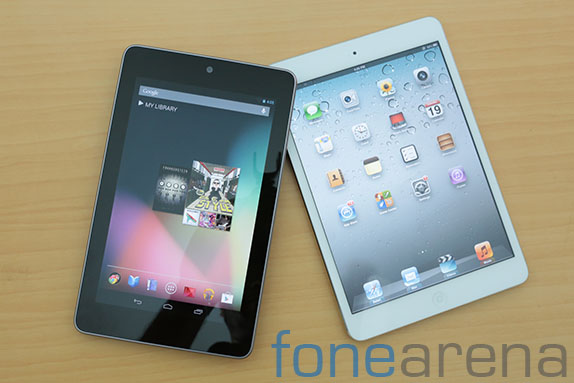 When the Apple iPad mini was launched on October 23rd, 2012, there was a specific comparison made by none other than Apple themselves, and that too, directly in their slides. The competitor in question was the Google Nexus 7. The Google Nexus 7 was the direct answer to the threat that was the Amazon Kindle Fire, which created a new wave of 7inch tablets, but it was time for Apple to react and hence came the iPad mini, and then the comparisons. These two devices go head on in every market in the world, and for the benefit of the masses, we have done a in-depth video comparison of the two, give it a watch –

When you consider that Apple themselves compared the Nexus 7 to the iPad mini on their slides, then you know that the Nexus 7 is special. Yes, it was Google’s first attempt at a tablet, and boy, did it pay off. So, coming to the comparison, let us go through the major differences of these devices.

The iPad mini easily bests the Nexus 7 in terms of colour rendition and accuracy whereas the pixel density on the Nexus 7 is way better. The Nexus 7 seems more readable, but when the form factor is in question, we definitely prefer the 4:3 magazine style form, at the expense of pixel density and readability. However, if one has put up with an iPad 2, then the iPad mini display would be of no problem. In fact, the pixel density issue creeps up only when you compare it with other devices. The Nexus 7 on the other hand has a very nice display, but it could be brighter at the maximum setting.

The performance is hard to be gauged, but with our tests, we feel that both these devices perform brilliantly and there is no need to be concerned about performance when in doubt, between these two devices. However it is important to note that the Nexus 7 has exclusive games for the Tegra 3 platform which enhances the graphics tailor made for the GeForce GPUs.

So, it all comes down to the software, which is the major thing to consider on any smart device these days. The Nexus 7, being a Nexus device, runs on the latest version of the Android operating system which is 4.2.1, at the time of comparison and is always updated to the latest version as blessed by Google. The iPad mini runs on the latest iOS, iOS6.1. Both these platforms have some fundamental differences. One of them being, companion dependence. The Nexus 7 is almost independent, with ability to downloading anything over the browser and managing files by itself whereas the iPad mini cannot do that, and relies on iTunes on Windows or Mac for its file management and other syncing purposes. However, it depends on the usage too, do you want a bigger iPod touch that can run nice full screen tablet apps or a tablet that can do stuff on its own and run only some good tablet apps? For deciding that, watch the in-depth video above, where we discuss most aspects written here, in depth.

In the end, everything depends on user preference, and regarding the price, the difference is only in a couple of thousands of rupees in the Indian market. Now that we have stated OUR opinion, it’s time for you to tell yours. So, let us know, in the comments section below. You can check out more comparison videos on our YouTube channel.

More photos of the comparison here