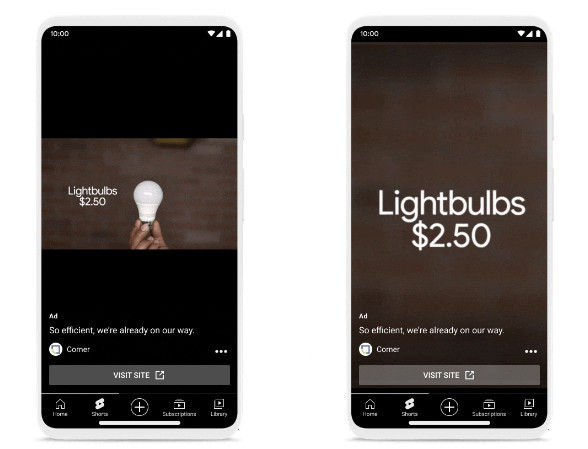 As a result, Google is giving advertisers of all sizes creative ideas and creative guidelines to help them make successful vertical video ads. Previously, YouTube Picture-in-Picture support for the iPhone and iPad is now available worldwide.

Google says it is experimenting with a new machine learning system that reformats landscape video advertising into square or vertical forms based on how someone is watching YouTube.

Easy templates to plug into

In the Asset Library of Google Ads, there are now four new video ad designs that can be changed and one square template. Users can use these templates to make a square or vertical ad for your brand in just a few minutes.

Support for any screen

YouTube’s transition from desktop to mobile to CTV (Connected TV) will let it reach a young, varied audience. And for marketers that want to generate content that resonates with all audiences, YouTube is well positioned to suit their needs.

Some YouTube viewers have noticed longer and more ads, especially in unskippable formats, in the past month or two. YouTube is pushing the limits with commercials, delivering 5 to 10 unskippable ads during a break. Longer gaps aren’t appearing with all videos or viewers, but they’re becoming more regular. They’re not long. According to user accounts, these ads are just five or six seconds each, so even a 10-ad break would be roughly 60 seconds.

hmm…this may happen with a certain type of ad format called bumper ads, since they’re only up to 6 seconds long. if you’d like, you can send feedback directly from YouTube via the send feedback tool

However, YouTube hasn’t admitted a planned rise in advertising, but the “Team YouTube” Twitter account responded to a user’s complaint by saying they are “bumper commercials,” which appear at the opening of videos and are very brief.

YouTube Shorts is an entirely mobile and vertical experience with over 30 billion daily views and 1.5 billion monthly logged-in users. By adding vertical video assets to Video action, App and Performance Max campaigns, which automatically scale to Shorts, marketers can participate directly in the Shorts environment and drive better results.