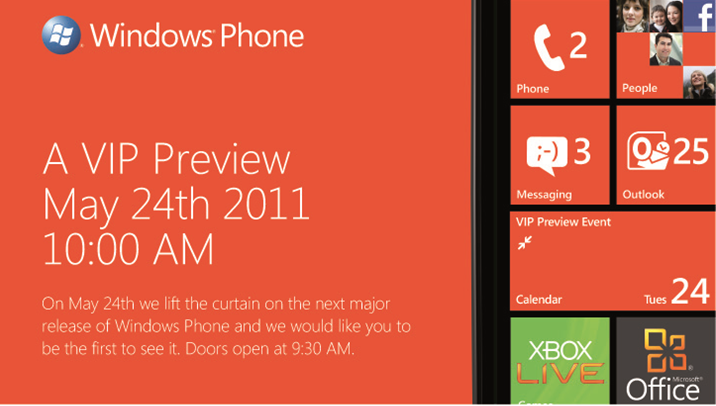 Microsoft launched Windows Phone 7 last year and its successor to Windows Mobile 6.5. WP7 is a totally refreshed and a different OS as compared to others, and it brings a lot of good features to users but it’s also missing some. Microsoft recently launched copy-past NoDo update for WP7, but users are expecting some more stuff. We are hearing it from a long time that Microsoft will launch a major update for WP7 which will bring new features to it and its codename is Mango. First we heard that it will be out at CES, but you know rumors are not always true. Now it looks like Microsoft is unveiling the next version of WP7 on May 24th, Microsoft will show the world their next version of WP7 with new features. It’s actually VIP preview of the WP7 and Microsoft want you to be the first to see it.

Mango will feature HTML5 powered IE9 browser, Twitter and Windows Live Messenger integration, and many more features. Well, just like you WP7 fans out there, I can’t also wait for the day when Microsoft will officially unveil the next version of WP7. Devices with new version of WP7 will be out later this summer, and I am pretty sure that all current WP7 devices will receive the update. So WP7 owners and fans, are you looking forward to the Mango update?