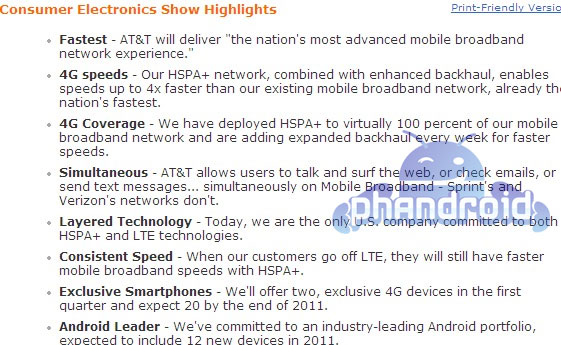 AT&T is the largest provider of mobile telephony in USA. AT&T was exclusively offering the iPhone from last few years, but now Verizon is also offering it. iPhone is like a backbone of AT&T’s smartphone line, and as Verizon is getting it too, I think that AT&T will lose a lot of customers. But according to a leaked screenshot above, AT&T is planning to launch 12 Android devices in 2011. They are already offering 7 devices, and it looks like AT&T is ready to bring some good Android devices. Motorola Atrix 4G is one of those devices, and its one powerful beast. AT&T is also launching the Inspire 4G, which is made by HTC and it is also a good phone. Hopefully, both phones will be available next month.

Well, I think AT&T is getting serious with Android, and now they are going to use Android as their shield. So folks I am sure that year 2011 will be very interesting for AT&T fans, especially who love Android. So tell us what you are thinking?