Android Q developers preview is expected sometime next month, but a month ahead of the announcement, early build of the OS was leaked. Android Q is said to bring a revamped permission management system, and now we are getting to see more details about this interesting addition to Android Q.

Android Q expands on that by disclosing to the user whenever any app is using the microphone, camera, or accessing the device’s location. This is shown to the user as status bar icons in the top-right hand corner. If the user taps the icon, a new dialog is shown that tells the user which apps are using which permissions. The UI also has special app access permissions like battery optimization, device admin, Do Not Disturb access, notification access, etc. is unchanged.

A new  “Financial Apps SMS Access” special permission has been added to the list and it’s possible that this new permission is intended for banking apps that use SMS for certain transactions. Android Q will alert the user when an app is accessing one of several sensitive/dangerous permissions including camera, location, and microphone. Google is also blocking background clipboard access in Android Q, in-line with the earlier report.

An app that has already been granted the READ_EXTERNAL_STORAGE permission prior to the user upgrading to Android Q will automatically be granted the “read” permissions listed above, but not the “write” permissions. Android Q is adding new permission which, when granted, always allows an app to have access to a device’s location, even when the app is running in the background. Thus, protecting users from undesired background location access but will also provide a mechanism for users to allow apps to monitor their location in the background. 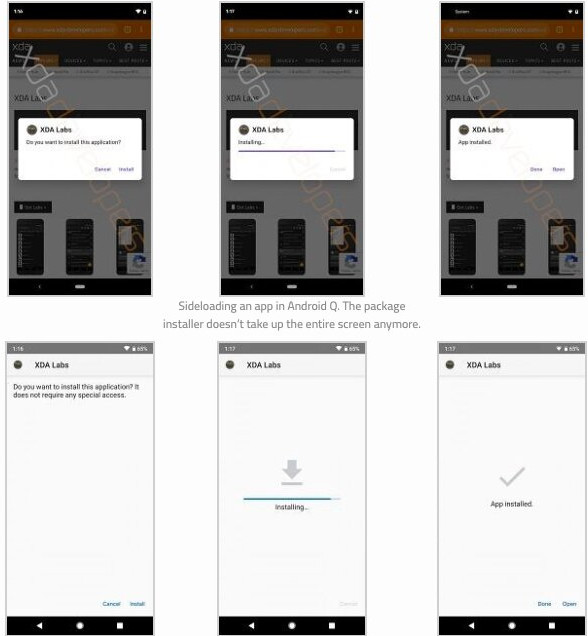 Android’s default package installer is getting a redesign. Rather than showing a fullscreen activity anytime you want to install a new app, the updated package installer in Android Q displays a small dialog in the middle of the screen. This is the first we’re seeing it on Android smartphones.

In Android Q, running any app targeting API level 22 or below (Android 5.0 Lollipop) will show a warning that the app is outdated. Google will require any apps submitted to the Play Store after August 2019 to target API level 28. Android Q would let you block calls from unknown, private, pay phone numbers, or any numbers not in your contact list. There’s a new Quick Settings tile called “sensors off” which not only turns on airplane mode but also disables all sensor readings on the device.