It is well known that Android can read your clipboard even if you don’t grant them runtime permission to do so. The reason why Android apps need to read the clipboard is that they can’t accept any text from the clipboard without it, meaning you can’t paste any text that you’ve copied. However, Google might be planning on changing this with Android Q.

New permission has been added which will limit what apps can read the clipboard in the background. The protection level of this permission is “signature,” meaning only apps signed by the OEM can be granted this permission. Reverting back to older version of apps needed root and Google doesn’t support it traditionally as it breaks the app. However, with Android Q, Google might change that and would allow users to rollback apps to an older version.

There were numerous permissions and commands that were found in Android Q that suggest it might be possible. First, the new and permissions suggest that the pre-installed market app can act as an agent to manage the rollback of application versions. The former permission is “signature” while the latter is “installer” on top of “signature,” so this means only a platform-signed app with the ability to install apps can use these permissions. A new flag has been added to the shell command. The flag may let you rollback an application to an earlier version.

In Android Q, new permission has been added to allow an app to have background access to the device’s location. The permission’s description to the user warns that the “app will always have access to the location, even when you’re not using the app.” This permission may be granted “additionally to the approximate or precise location” permissions so the app “can access the location while running in the background.” In contrast, the coarse location permission can only get your location based on network sources like cell towers or Wi-Fi networks, but only when the app is in the foreground. 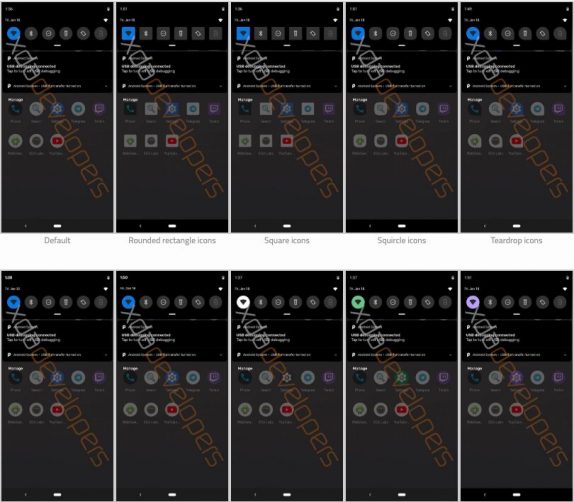 Lastly, with Android Q, Google is expected to bring new Font, Icon Shape, and Accent Color Overlays. In the Android Q initial build that was leaked, there were multiple pre-installed overlays that showcased the ability to change the font, icon shape, and accent color throughout the UI.

The list of a new font, icon shape, and accent color overlays include Arvolato and Rubik (font), Rounded Rectangle, Square, Squircle, Teardrop (icon shape), and Black, Green, Purple (Accent Colors). We don’t know for sure if Google would bring these customization options to the final build.