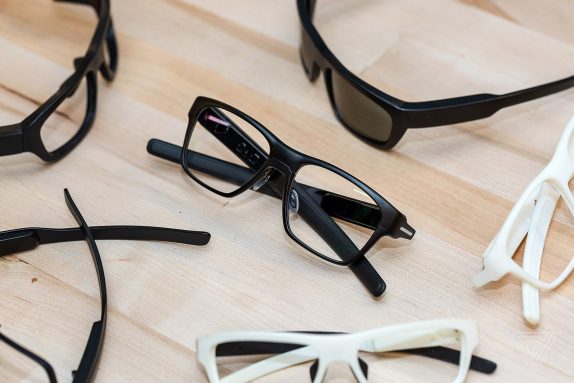 Intel has introduced the new Vaunt smart glasses with retinal projection and motion gesture controls. These smart glasses are first seen by The Verge are very similar to that of the regular glasses and they weigh just 50 grams since they are made of plastic.

These glasses work with or without the prescription lenses, and there is no camera equipped. While the outside is like any other glasses, the inside sits a low-powered class one laser, a processor, an accelerometer, a Bluetooth chip and a compass. The low-powered laser emits a red, monochrome image into your eye at a pixel rate of 400 x 150.

Intel says that the image can let you if its anyone’s birthday, send notifications from your phone, and it is also capable of detecting your current status and send suggestions, for example, if you are in the kitchen, it will send you the recipe. Since it is beaming the laser on to your eyes, it is always in focus. The company also says that the future models will come equipped with a microphone and access to smart assistants like Alexa or Siri, but the first-gen will be limited to motion gestures like a nod of the head.

It is unclear as to when Intel plans to roll out these glasses to the public, but they will be available as “early access program” for developers later this year. Since the project is in very early stages of development, so there’s no way to tell if these will ever make it to the markets.