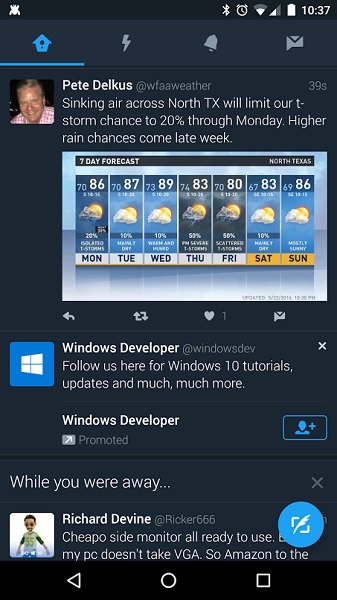 Twitter is testing a new automatic night mode for its Android app, according to an image posted by Taylor Wimberly on Google+.  The new UI is currently being tested on bunch of selected alpha testers of the app.

The Twitter UI will automatically switch to night mode from a white background with black text UI. Instead there will be a darker blue background with hints of blue and white text based on location and time of the day. In addition to the night mode, Twitter is also tweaking UI with hamburger slide-out menus, overflow buttons, as well as floating action buttons (FAB) for the composing new tweets.

The night mode feature for the alpha version of the Twitter for Android app comes on top of a redesign which adds tabs for Timeline, Moments, Messages and Notifications. The idea of a night mode UI is mainly to make it easier for users to browse Twitter when you are in the dark. Currently, there is no option to switch the night mode off manually and it stays that way until morning. It is expected that an update will add a toggle switch button to the app.

There is no word about when the automatic night mode UI will roll out to everyone.